Charles (known as Charl) and Roy Bromley were the sons of William and Annie Bromley of ‘Leeds’, 101 Munro Street, Coburg. Roy was a clerk, Charl a fitter. Their father, an accountant, married Annie Phillips in Hamilton and there were eleven children in the family, born between 1875 and 1893, the last two being Roy and his twin sister Nellie who were born at Yarrawonga in July 1893. Their father died in Feburary 1918, only five months after Roy died on the Western Front. Their mother remained in Coburg, where she died in 1942.

Twenty-five year old Charles Bromley enlisted on 15 August 1914 and served on the Gallipoli Peninsula and later on the Western Front. In 1917 he married English nurse Elsie Edwards. They returned to Australia and lived out their lives in the suburbs of Melbourne.

Roy Bromley enlisted on 4 October 1915 aged 22. He served in France where he was slightly wounded in 1916. He recovered quickly and returned to his Battalion, only to be killed in action in France on 26 September 1917. He was buried at Hooge Crater Cemetery, two miles east of Ypres.
After the war, a tree was planted in his memory at the Memorial Avenue of Trees at Coburg Lake. You can still visit the Memorial Avenue of Trees and although a number of the original trees have long gone, the Moreland City Council has recently planted new trees to complement those that remain. The Council has also erected two large interpretive panels at each end of the walk that include a plan of the original plantings. The Avenue is well worth a visit and is highly recommended. 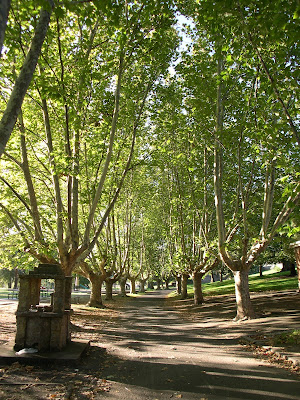 
Last year I visited the State Library of Victoria, where a collection of letters, postcards, photographs and other items relating to Roy’s war service are kept in the Manuscripts Collection, MS BOX 4406/6, 4409/15. If you are interested, you can see the catalogue record here.


I’ve included the description here, in case it is of interest to you: There are four letters from him plus 37 photographs. Comprises four letters from Roy Bromley to his family, 4 Sept. 1916-9 Aug. 1917 and undated (three in postcard form); one letter from mother to Roy, 27 Nov. 1916; one letter from Lieutenant H.S. Gray reporting the death of Roy; thirty-seven photographs of Roy and his brother Charles, Roy's grave in Hooge Crater Cemetery, Gallipoli and Britain, and a view of the troopship Anchises; Roy's identity disc; a ring made on the Somme and a ribbon with star sent to Roy's mother on his death; and a press clipping from the Weekly Times, 26 May 1917, containing a photograph of Roy. Biography. Roy Phillips Bromley, a clerk whose family lived in Coburg, Vic., enlisted on 4 Oct. 1915 (no. 2813); served as a corporal with the 29th Battalion; and was killed in action on 26 Sept. 1917. Charles Edward Bromley (Charl), a fitter, enlisted on 15 Aug. 1914 (no. 207) as a private with the 7th Battalion; rose to the rank of sergeant; and was repatriated to Australia on 26 Nov. 1918.
As I worked through the collection, I extracted some details, which give us an idea of what the war was like for the Bromley family:
1. Letter from Roy, 20 September 1916, D Company, 29th Batn. Written 'In my dug out'. The letter begins ' Your welcome letters to hand ... believe me they were the most welcome ones I have ever received. I read them in my dug out under very heavy shell fire.'  He says ' Well parents, I am still well but the weather is not to my liking, too cold, the past two days it has been raining. You ought to see the mud etc ...' He also mentions Charl [His brother Charles Edward]. He goes on to say  'At present there is a very heavy shell bombardment. Hope it won't interfere with my letter writing. You ought to see me in my steel and gas helmet, you would not know me.'  Then 'Well Parents, I must close and take some cover from schrapnel.'
2. Letter from his mother, 101 Munro St., 27 Nov 1916. Wrote to say they were praying for a good recovery from being wounded - 'Poor poor old darling boy'. She ended: 'Will the war never end it is dreadful all the cruel things that are being done.'
3. Letter to his parents from Roy, France, 9 August 1917 and 8 page letter on YMCA Paper undated, saying he left France on 25 August 1917 for 10 days leave around London. He gives details of what he did and who he saw.
4. Very tattered page from 'The Weekly Times', 26 May 1917  'Cheerful Australians among the ruins'. Roy front - 4th from left in helmet holding gun. (You can see it below, taken straight from TROVE. It's a very poor quality image, but in the copy in the MS collection, Roy has identified himself as the man at the very front, holding the gun.)

And here is the same image in the Australian War Memorial Collection, Image E00361. Once you've read the description, you'll see the dilemma. Is Roy in the photo, or not? 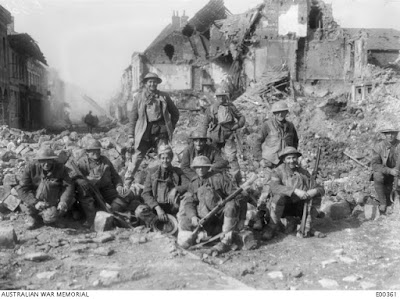 'It is with very much regret that I now have to inform you that your son has been now reported Killed in Action on the 26th September.I have been hoping against hope that he would turn up alright, but we have just recieved word from a wounded man who says that both he and your son Roy were together when a shell burst close to them. This man Private H.A.L. Davies was wounded but your son was killed. ...There is nothing I can say about Roy that is too good for him, both as a soldier and a man. He was one of the most dependable men in the company and one who could always be relied on, no matter what the circumstances were.When Bapaume fell on the 17th March, I had to go out, well in front of our line to reconnoitre the position. It was a particularly trying and dangerous task and I selected Roy to come with me. He worked splendidly there and it was largely due to his courage and initiative that I gained much information for further operations. Since then he has proved his worth too.Not only was he a fine soldier but he was most popular among the Company. I am sure I am expressing the feelings of the whole company, officers, NCOs and men alike when I offer you our deepest sympathy.'

6. Postcard - France. Photo of soldiers of 29th Bn. Roy’s note is dated 6 Oct 1916. He says it's a photo of the Fire Brigade Staff and he says he's a fireman.
7. Postcard, France, 4 Sep 1916 to his twin sister Nellie. It has embroidered flowers on it.
8. Postcard, France, 10 March 1917 to his mother. This is also embroidered.
9. Photo of Roy's grave in a card issued by Australian Graves Section to Mrs A. Bromley, 54 Wellington Street, Coburg. He was interred at Hooge Crater Cemetery, Plot 11, Row D, Grave 15. The nearest railway station is Ypres.
10. Photo of Roy in uniform.
11. Photo of HMAT Anchisis, 24 March 1916. You can just make out the soldiers on the deck.
12. Photo of five soldiers on camels, Egypt, 1915. Sphinx in background. Charl Bromley, #207, 7th Btn, 2nd from right. Two native men sitting in front - the camaleers?
13. Photo of Charl, Egypt 1915. Other soldiers looking on. Same day and place as the previous photo.
14. Photo of three soldiers. Roy on left. Probably taken before they left – their uniforms look pristine. There is no Rising Star badges on hat.The man in the middle has 'Vic' on his hatband.
There follows 5 pages (10 sides) of photos taken from a photo album.
Side 1. Charl in hospital. Charl in camp in England.
Side 2. Salisbury Plains, under snow. Salisbury Plains. (It's a big map of Australia with 'Australia' written on it on the hill behind.)
Side 3. Top: Photo of Charl, Harcourt and Has. Harcourt in civilian clothes. Has looks older and has a big moustache. Below: several photos of Charl, probably in England. [Has and Harcourt are their much older brothers.]
Side 4. One photo without caption. One photo of Charl in Egypt. One photo of Charl with daughter coming home. One photo of two soldiers, the one on the right is Roy.
Side 5. Photos of Charl a) in Egypt and b) probbaly in England.
Side 6. The landing at Gallipoli. With the Australians at Gaba Tepe. Both commercially produced postcards.
Side 7. Charl on camel in Egypt. Charl in camp, England (seated at front).
Side 8. 4 photos - Roy in Egypt, Charl in Egypt, Charl (left) and Roy with Egyptians.
Side 9. Charl (standing 2nd from right) in snow. Loch Lomond.
Side 10. Roy top left. Charl in Ruins, Egypt and on the boat home(?)

So, if any of these items sound of interest to you, don’t forget that you can find them in the State Library’s Manuscript Collection, where many more WW1 related collections can be found.