Harold Jackson, son of Charles and Marion and past pupil of Coburg State School, was a 24 year old civil servant when he enlisted in October 1916. His war service was brief. A member of the Australian Naval and Military Expeditionary Force (AN&MEF), his ship, the SS Matunga, was captured by German raider en route to Rabaul in July 1917, effectively ending his acitve service. 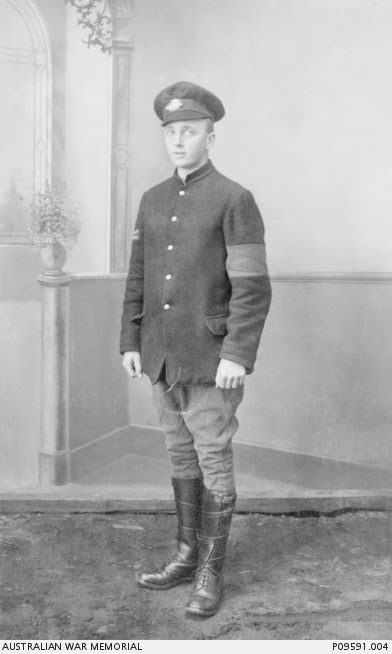 By early 1918, Harold Jackson found himself in a POW camp at Güstrow, Germany. Here he remained until he was repatriated on 31 December 1918. While in the camp, he performed as a member of the the ‘Bing Boys’,  a Prisoner of War (POW) entertainment troupe. The following photos were taken on the occasion of the Second British Pierrot Entertainment at POW camp, Gustrow, Germany. 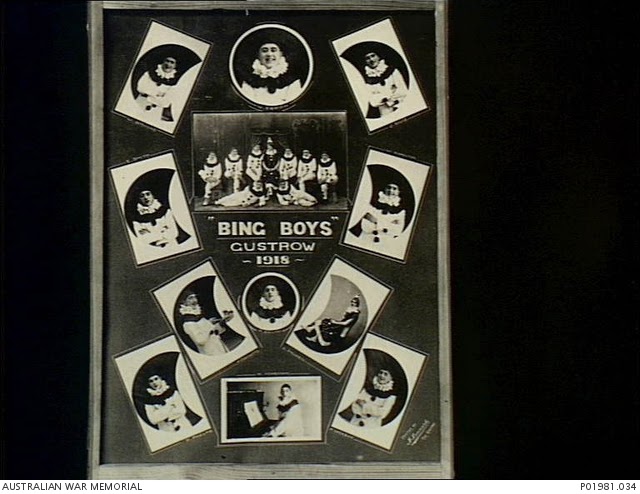 8 September 1918. Germany: Mecklenburg-Vorpommern, Gustrow. Theatrical billboard advertising the ‘Bing Boys’, a Prisoner of War (POW) entertainment troupe on the occasion of the Second British Pierrot Entertainment at POW camp, Gustrow, Germany. (Jackson is probably the man in the circle under the name of the group.)
Image courtesy AWM. Image P01981.034 September 1918. Informal group portrait of Prisoners of War (POW) artists of the ‘Gustrow Bing Boys’ entertainment troupe at a POW camp at Gustrow, Germany. ‘The Bing Boys Are Here’ was the first of a series of revues which played at the Alhambra Theatre, London during the last two years of the First World War and they are the origin of the name used by the POWs for their production. The performers are wearing pierrot costumes. Harold Jackson is in this group.
Image courtesy AWM. Image P03236.214

The Coburg Cowboys raise money for the war effort 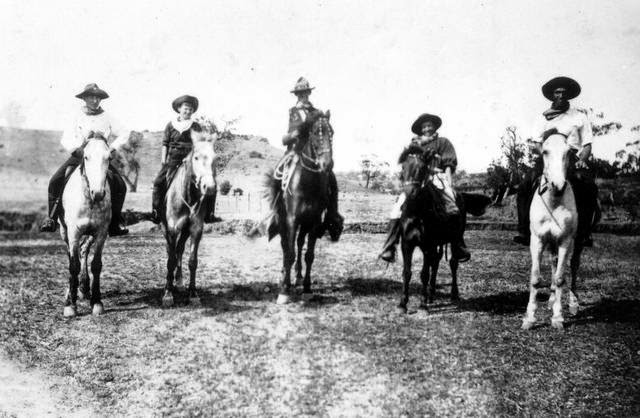 Around the time of the First World War, the Coburg Cowboys were local celebrities. They had their headquarters at the ‘Southern Cross Ranch’ in Bell Street and began appearing around the traps in about 1910.

Indian Pomp was their chief and he led a team of over twenty local men who performed dare devil feats on horseback for huge crowds all around the suburbs. His riders included Duckfoot Bowden, Tenderfoot Howden, Bluegum Leo, Buffalo McGann, Rooster Hodson and Mustang Robson. 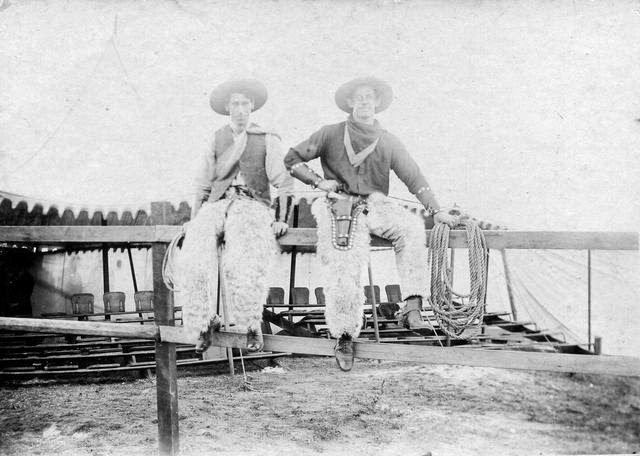 The Coburg Cowboys were prominent in fund-raising carnivals all over Melbourne during the war years and by 1916 at least two of their number had enlisted. ‘Broncho Bill’ joined the AIF and by November 1916 was in England, presumably waiting to go to the Western Front. ‘Bud’ Taylor left Australia in 1913 and headed for Texas where he won a number of rough riding competitions. At the outbreak of war he was working on a ranch in Canada. After enlisting in the prestigious Lord Strathcona’s Horse, he served in France.

At this stage I have been unable to discover more about Broncho Bill and Bud Taylor’s war and I don’t know whether any other members of the Coburg Cowboys enlisted, but I’m working on it!


Recently, while working on some material at the Coburg Historical Society museum, I came across the sheet music for a popular song of the era, ‘Are you from Dixie? (Cause I’m from Dixie, too!)’. Words by Jack Yellen and music by George L. Cobb. Copyright 1914.

The song would have been sung at local fundraisers for the war effort and the sense of nostalgia for Coburg (and Brunswick) seen in the words of the song must have been shared by the many men who enlisted from the area. 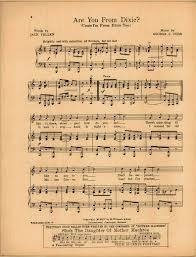 A sticker has been added to the front: ‘This music is one of the original songs sung by the West Coburg Minstrel Troupe. (Note the change of words to suit Coburg and Brunswick!’)

Minstrel troupes originated in the United States. They were very popular forms of entertainment in their time and made their way to Australia where little thought was given to the issues of race that lay behind the blacking of faces and the mimicking of the stereotype of American blacks as lazy, stupid, superstitious and so on. 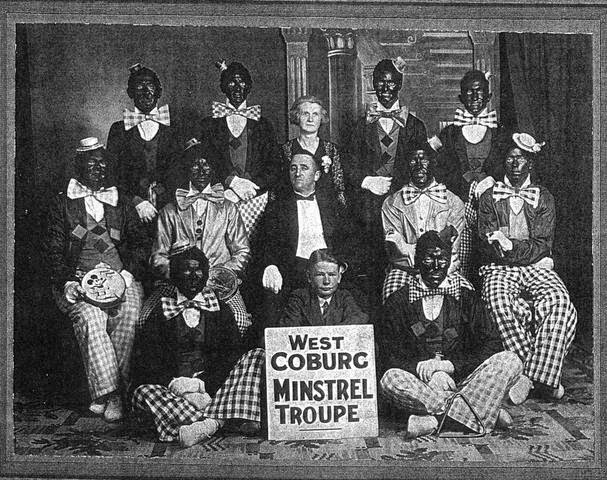 These are the words of ‘Are You from Dixie’ with local alterations:

Verse 1.
Hello, there, stranger, how do you do?
There’s something I’d like to say to you
Don’t be surprised
You’re recognised!
I’m no detective but I’ve surmised
You’re from the place where I long to be,
Your smiling face seems to say to me,
You’re from my own land
My sunny homeland
Tell me can it be?

Verse 2.
It was away back in eighty nine,
I crossed the old Mason Dixon line (Coburg Brunswick line)
Gee! But I’ve yearned.
Longed to return to
All the good old pals I left behind
My home is way down in Alabam’ (near Brunswick)
On a plantation near Birmingham (On a poultry farm near Merri Creek)
And one thing’s certain,
I’m surely flirtin’
With those south-bound trains.

The inside front cover of the sheet music for ‘Are you from Dixie?’ features part of ‘He died at the Dardanelles’. Inside the back cover is the title page of ‘We’re proud of you, Australia (or The Battle of the Dardanelles)’, written and composed by Jack A. Little. 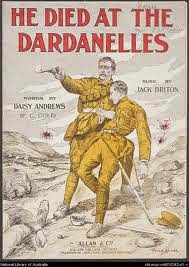 Once I started to search on the internet, I realised just how many patriotic songs were released during the war years. Here are just a sample. 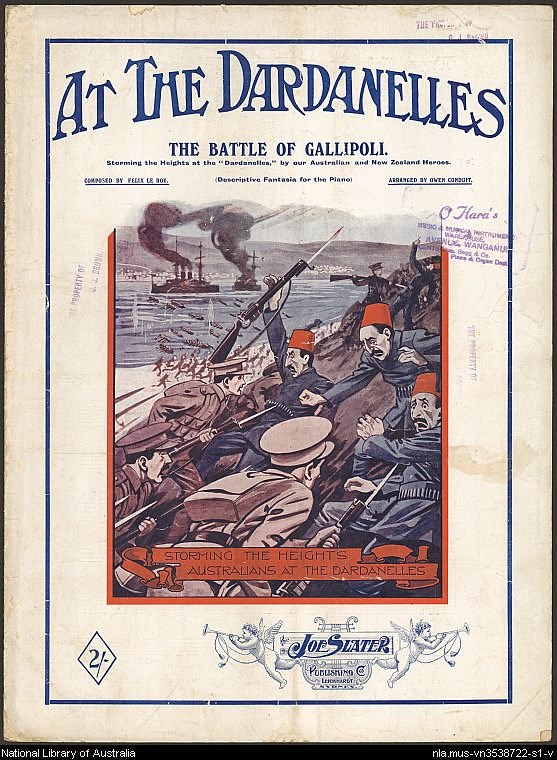 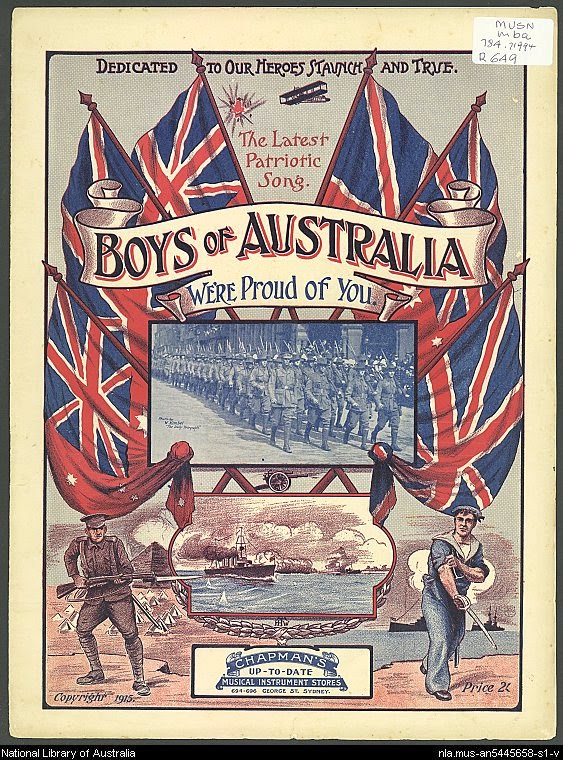 Robert Holden’s And the Band Played On 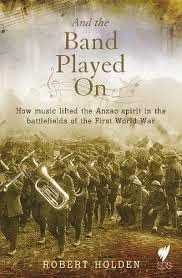 This newly released book has gone on to my ever-growing list of ‘must reads’, especially as I have been interested in the role of music in lifting the soldiers’ spirits (and those at home) for many years – since my mother introduced me to Skipper Francis’s stirring song ‘Australia will be there’, one of the most popular songs of World War One. Mum heard it as a young girl in the 1920s and remembered the tune and words. I found the sheet music in a collection of old songs, then began to look around for other songs of the time. I’m still looking and still finding more. I’ve now added poetry to my search, so if anyone reading this has suggestions for either Australian songs or poetry or short stories that I could add to my collection I’d be very interested in hearing from you. 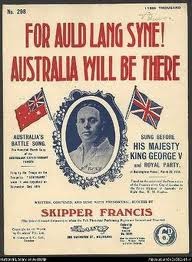 I’ve also been interested in Australian folk music since I was a teenager and have read widely on Australia’s folklore, the great storytelling tradition and all those stereotypes that we now associate with the Diggers at the front: reckless bravery, taking the mickey out of the bombastic British officer class, irreverent humour and most of all mateship.

This should come as no surprise to those of you who follow this blog, given that I chose the title ‘Fighting the Kaiser’, taken from a popular parody of ‘Waltzing Matilda’.


In my last post I wrote about a Coburg man who deserted. There were others, of course. And there were others still who committed crimes and were sentenced to long gaol terms, some of which they completed on their return to Australia. 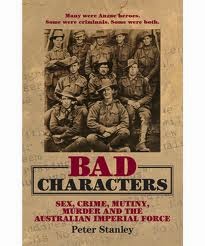 Historian Peter Stanley has written a book about those Australians who did not live up to the Aussie digger as hero image (and there were many of them) and if you want to get a more balanced view of what life was like for our soldiers at war, I can highly recommend it. It was published in 2010 by Murdoch Books and you’ll probably be able to find it through your local library service.

Deserters and the pain they left behind

So much of our focus when we think of war is on war heroes.
We remember the men and women who died and in our collective memory they all died heroic deaths, although, as I have shown in this blog, many died by accident, through illness, quirks of fate or as the result of wounds they received before they’d even had a chance to fight.
We remember the men and women who returned with terrible injuries, physical and psychological, although we don’t always know how to deal with them when they do return.
We remember those who were prisoners of war and we write stories and make movies about their (often horrendous) experiences.
We demonise the enemy as though that somehow that justifies the often unjustifiable acts of our own soldiers, for no one wants to think of their own side as being less than honourable.
We rarely remember the men who spent long periods in prison as a result of their criminal actions while on active service.
We prefer not to think about the men who spent most of their war service being treated for venereal disease.
We rarely speak of soldiers who deserted. Nor do we think of the extraordinary burden their desertion placed on their families.


One such man was 60914 Private William Dunne, also known as William Dunn, Louis Jean Dunne and 2647 Louis Jean Deschamps. His attestation papers run to 124 pages, reflecting the confusion caused by his enlistments and re-enlistments under a variety of names. 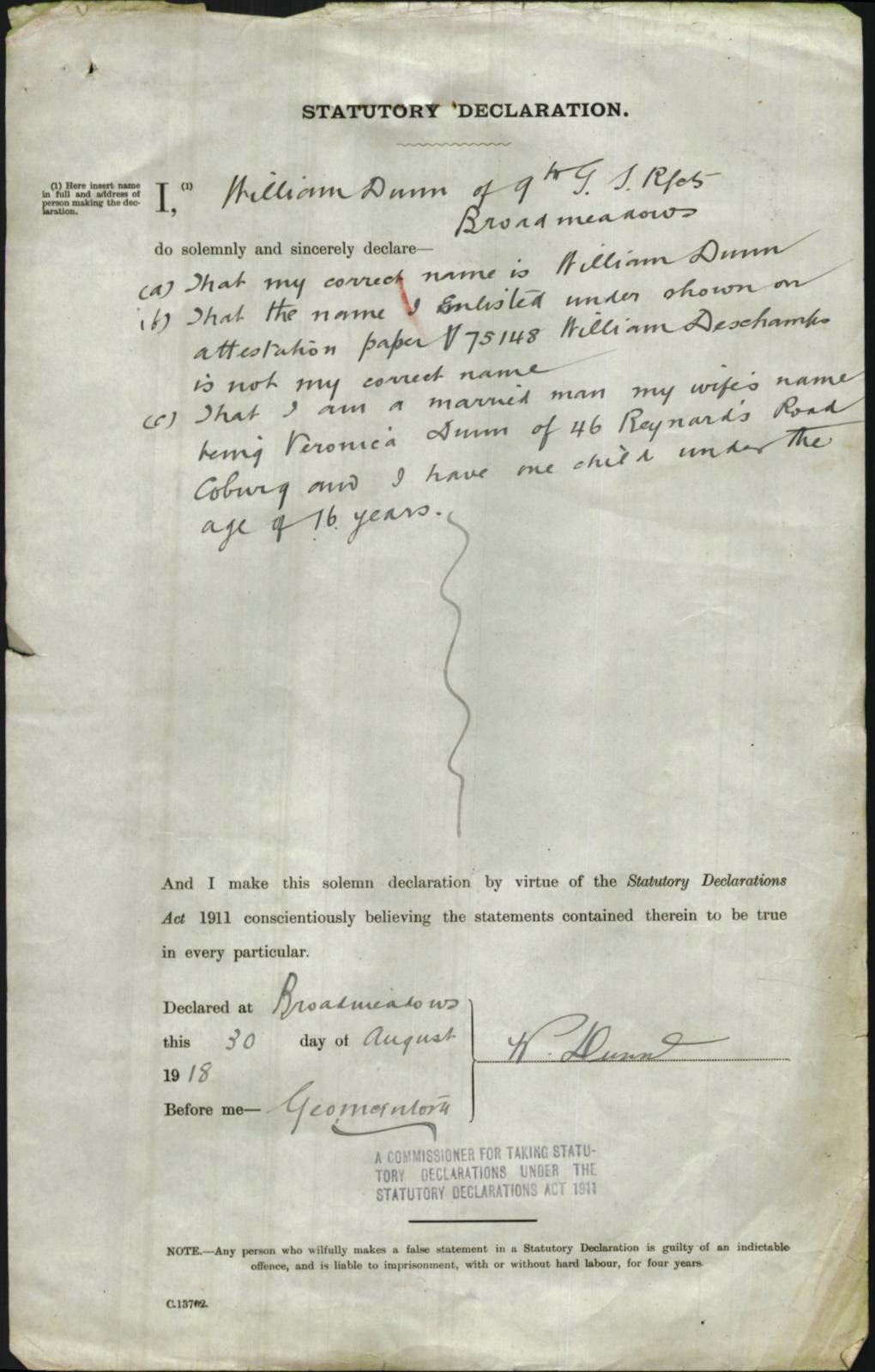 Born and bred in Coburg, Dunne was a 19 year old married broom maker living at ‘Kinvarra’, 46 Reynards Street when he enlisted at Coburg in December 1917. He was discharged on 14 March 1918 on account of a hernia that was identified on the morning of embarkation. A week later he re-enlisted at Fitzroy as William Deschamps (his mother’s maiden name), claiming to be from Newcastle, NSW and a motor mechanic. It was soon discovered that he was, in fact, William Dunne, husband of Veronica Dunne. Despite his young age, Dunne had married an even younger Veronica Baylis in 1917. One child, William, was born in 1918, around the time his father left for the war. Another, Lawrence died as an infant in Coburg in 1919.
Dunne embarked for England on the Barambah on 31 August 1918, but did not see active service on account of the Armistice. He deserted on 12 December 1918 and was not seen again.
On 26 March 1919, his allotment to his dependents ceased on account of his desertion, so Veronica Dunne not only had to bear the shame of a husband who was a deserter and endure the death of her infant son Lawrence, but through his actions, her husband had left her to raise their son William without financial support. In 1920, she applied for a living allowance but this was not allowed because he was still illegally absent. 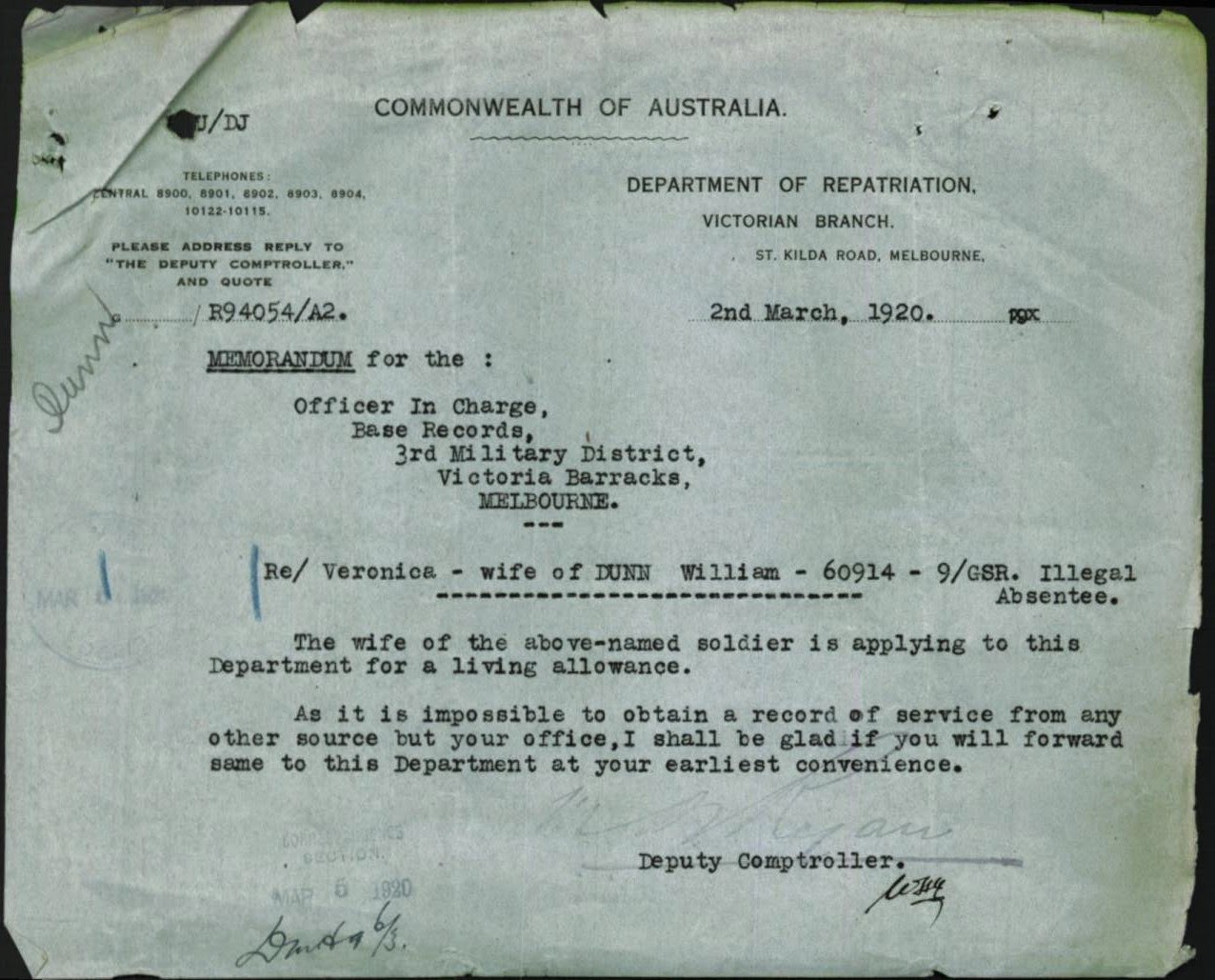 Veronica Dunne must have found work at Lincoln Knitting Mills in Gaffney Street, Coburg, because in a letter written in 1924 from the Mills’ Silk Rooms she says that he deserted her six years before and she planned to divorce him. 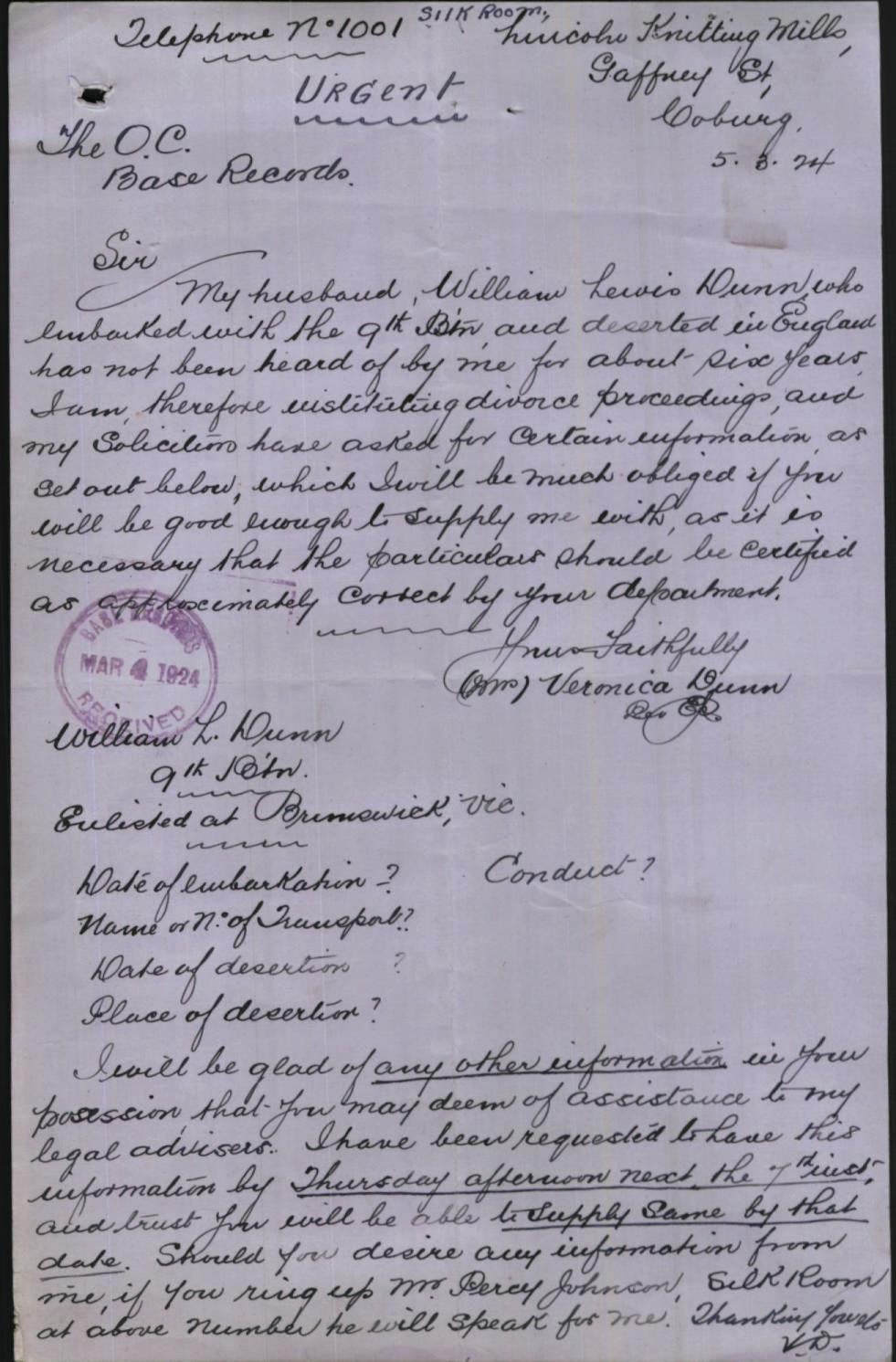 When her son William, a textile worker (a hosiery topper, so he possibly worked at Lincoln Mills), enlisted in World War Two in January 1941 she is recorded as Mrs Veronica Stephens of Officedale, via Officer. William married while in the army, served in New Guinea, survived the war but died in 1947 aged only 29.
Whatever became of William Dunne is a mystery and Veronica Dunne was to suffer the loss of her son soon after another war. But at least the official records have revealed that she did remarry and hopefully she found happiness in this second marriage. She died in Parkville in 1966 aged only 65.