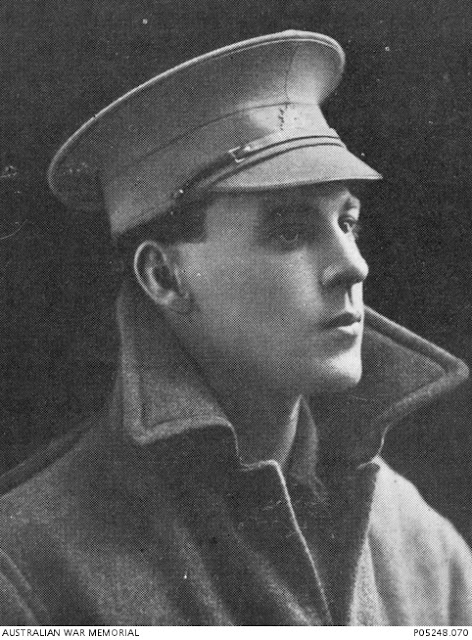 1917 Studio portrait of 38512 Gunner Charles Alfred Kedge, 14th Field Artillery Brigade of Coburg, Victoria. A school teacher prior to enlisting, he embarked from Melbourne aboard SS Indarra on 26 November 1917. On 16 September 1918, he was killed in action during operations near Fricourt, Somme, France, aged 23. He is buried in the Cerisy-Gailly French National Cemetery, France. Image courtesy AWM. Image P05248.070.


Charles Kedge was not really a Coburg man. He was born and educated in Bendigo and began his working life there as a junior teacher at the Violet Street School. He was sixteen and showed promise, so four years later, in February 1915, he came down to Melbourne to train at the Teachers’ College.

It was at about this time that his brother Frederick, aged 18, joined the Navy. Frederick was a career naval man and served in both world wars before retiring in 1943 at the rank of Commander. He married in New South Wales in 1925 and died there in 1972, so he wasn’t a Coburg man either.

Their parents – Charles Elliott Kedge, an ironmoulder and Adelaide Catherine (nee Simpson) – moved to Coburg in 1915 with their youngest son Reginald. They lived in Linda Street, Moreland until 1919, just on the southern edge of the suburb, then moved a few streets further south to Canberra Street, Brunswick, where they remained for the rest of their lives.

What motivated the Kedge parents to move to Coburg is unclear, but perhaps the fact that their son Charles was at the Teachers’ College and Reginald had just won a scholarship to attend secondary school were factors in their decision. For Reginald it was a move for life. He died in Coburg in 1969.

Apart from visits to the family at Linda Street, Charles Alfred had little to do with Coburg. It appears he lived close to the Teachers College and not long after he successfully completed his first year in December 1916 he went into camp at Seymour. He embarked on November 1917, was in camp in Egypt for some weeks before going to Officers’ School in Woolwich, England. He arrived in France in July 1918 and was alloted to the 114 Howitzer Battery Field Artillery and was killed not long after, on 16 September 1918. 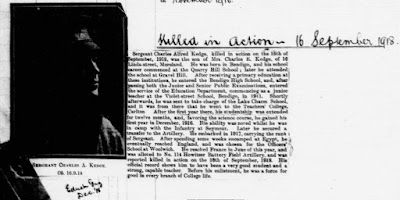 From Charles Kedge's Teacher Career Record, Victorian Education Department teacher number 17123. (Digital copies of these records are available via Ancestry, but you need the teacher number to locate them. The numbers can be found in the online collection of the Public Record Office of Victoria.)

The circumstances of his death are outlined in the Red Cross Missing and Wounded Files, available online through the Australian War Memorial. An eye witness said Charles and three others died about 8.30 on the night of the 16th. They were sleeping in a shell hole at Brusle near Peronne (in Picardy, France) and were killed by an aeroplane bomb. 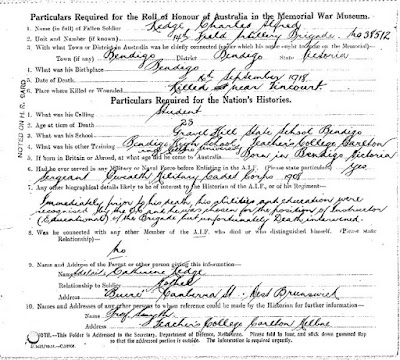 Charles Alfred Kedge is remembered on the Bendigo Roll of Honour and the Coburg Lake Memorial Avenue of Trees (tree 64). 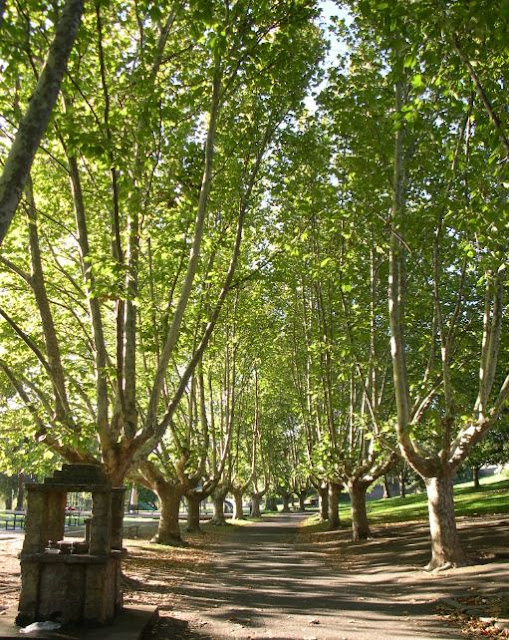