54 years ago this Anzac Sunday ceremony took place at the front of Coburg Town Hall, April 1964. 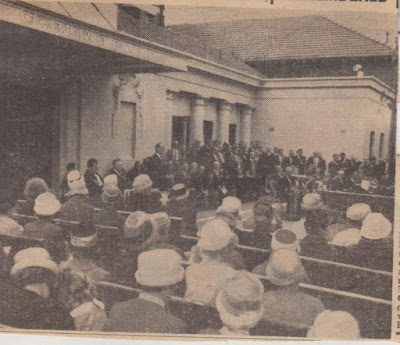 
The Coburg War Memorial, in the form of a cairn and erected in 1924, is out of view, to the right of the photo.

Most memorials erected after WW1 were obelisks or diggers on pedestals. Coburg did something different. There are no names on the memorial, but inside City Hall is a large honour board listing all the Coburg servicemen. There is also an Avenue of Honour in Lake Reserve and a monument in Rogers Reserve, Pascoe Vale, among others. This memorial lists later conflicts, too.


And although it's not about Coburg, I found this article and its accompanying photograph very moving. It's from Anzac Day 1948, seventy years ago and was published in the Age on 26 April 1948. 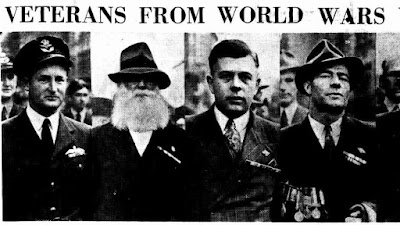 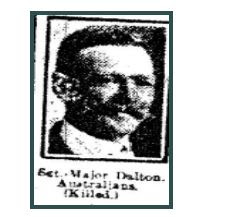 William Dalton was born in September 1883 at Tockwith, Yorkshire, the son of a brewery labourer. 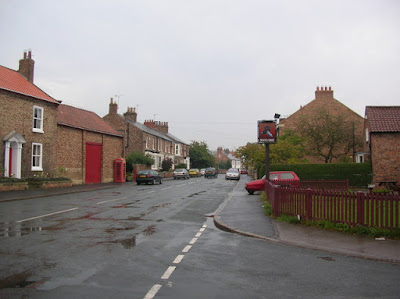 In 1900, aged 18, he joined the Prince of Wales’s Own (West Yorkshire) Regiment. At the time he was a labourer at the Tower Brewery in Tadcaster, Yorkshire. In 1901 he joined the King’s Own Scottish Borderers with whom he served until October 1912 by which time he had been promoted to Sergeant. During his time with the Scottish Borderers he served in South Africa (during the latter stages of the Boer War), Burma, Aden and the East Indies.

In December 1909 William Dalton married Isabella Matheson, a nurse working in Edinburgh. Their only child Elsie was born in August 1912 at Dalchalm in Brora on the north-east coast of the Scottish Highlands, Isabella’s home town so perhaps it was the birth of their child that prompted him to give up his career in the military. 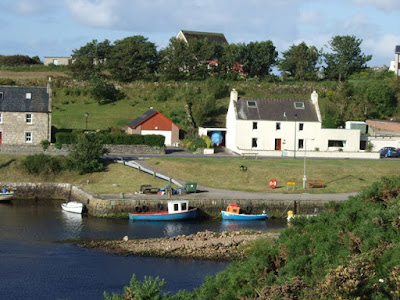 He now had an army pension and a little capital behind him and the Daltons decided to emigrate. They chose Melbourne as their destination. 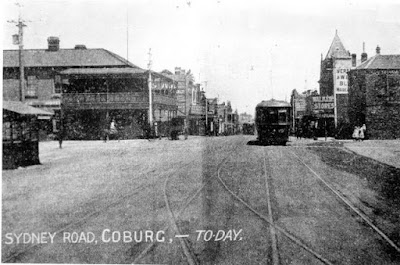 Taken from a promotional booklet for the new City of Coburg - 'Inception of a New City', 1922.

After their arrival in June 1913, the Daltons settled in Coburg, in Melbourne’s North. Their address in the 1914 electoral roll was 22 Reynards St., Coburg, on the corner of Sydney Road, next to Alfred Miller’s Wood and Coal Yard. Now a member of the Army’s Instructional Staff, Staff Sergeant Major Dalton would have had a short walk up the street to work. He was based at the newly opened Military Drill Hall, 120 Reynard Street, where he worked with the 59th Area cadets.
You can read more about the Coburg Drill Hall here. 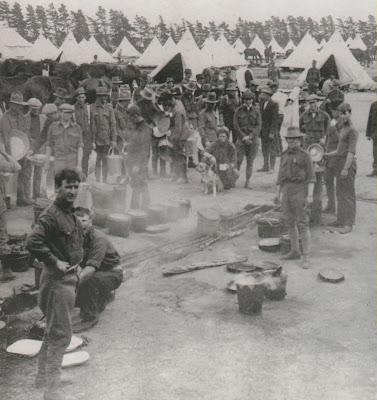 Not long afterwards, in February 1914, he became Staff Sergeant-Major Instructor in Cookery to the AIF Camps in Australia, based at Broadmeadows. This School of Cookery was a new initiative of the Defence Department.
In January 1916 William Dalton applied for a commission in the AIF. He gave his military qualifications - Baker and slaughtering at Aldershot; Cooking – Aldershot; Musketry – Hythe; Machine Gun – Hythe; Mounted Infantry – 4 courses, Longmore, 1 Hyderabad, SSM Instructional Staff. In total he had been a soldier for 17 years and he must have been optimistic about his future prospects.

Part of William Dalton's unsuccessful application for a Commission in the AIF.

However, any hopes he had of gaining a commission were dashed in late August 1916 when he was court-martialled for having received a large quantity of stolen tea.  Not only that but two days after the theft he had left the Broadmeadows camp and turned up several days later in Albury, NSW where he was arrested by the civil police. He’d been there trying to enlist as a private under an assumed name. He  had passed the medical but was then arrested, given away by a presentation wristlet watch which bore his proper name. He denied the charges, saying there was a conspiracy against him.
He was found guilty of receiving stolen goods and for being absent without leave, reduced to the ranks and sentenced to imprisonment with hard labour for 90 days. He was, however, given the option of enlisting in the Australian Imperial Force rather than undergoing his sentence. He chose enlistment and his sentence was remitted from 5 September, the date he enlisted. 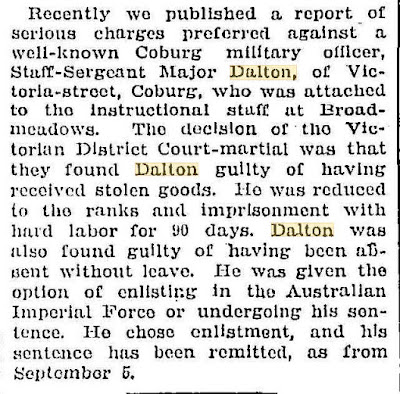 
5963 Private William Dalton left Melbourne with the 22nd Infantry Battalion, 16th Reinforcements on 2 October 1916 on board HMAT Nestor. Also on board were Joe Grattidge of 24th Battalion, 16th Reinforcements, an old boy of Coburg State School), Patrick Joseph Lynch of May Street, Coburg, who died of wounds on 6 May 1917 and Thomas Reid, a tram driver of Rennie Street, Coburg, 24th Battalion.
Dalton arrived in France on 9 February 1917. He was promoted to Lance Corporal on 25 March 1917. He received a gun shot wound to his right arm, face (slight), chest and left thigh on 15 April 1917 and was evacuated to the Norwich
War Hospital on 20 April. He returned to France on 15 June and was promoted to Sergeant 4 September.

On 3 October 1917 William Dalton was killed in action at Ypres. He was 34 years old. An eye witness, Captain W.H. Bunning of the 22nd Battalion, said that Dalton had just returned from burying the dead and was sitting down in a trench smoking when hit by a shell. He was one of eight men killed. 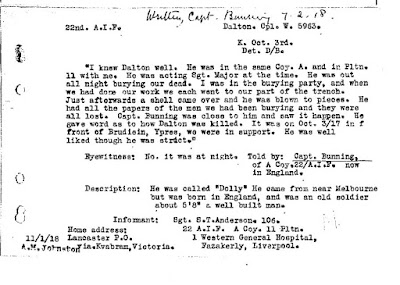 From the Red Crossing Wounded and Missing Enquiry Bureau file.

His widow was sent his personal effects – a pipe, notebook, letter, shaving gear. 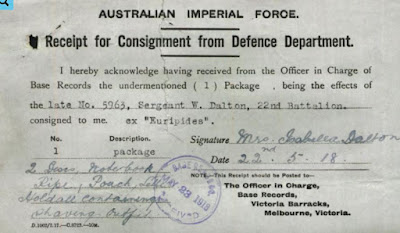 Alone in a new country with a small daughter to raise, Isabella Dalton lived at 17 Victoria Street, Coburg for a short time then in Little O’Grady Street, Albert Park before returning to the UK. She and Elsie (now 6) arrived in Liverpool on 28 November 1918, a little over 5 years after their journey to Australia. They returned to Isabella’s home town of Dalchalm in Brora, Scotland. 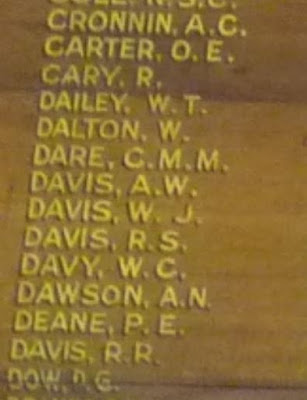 William Dalton's name on the Town of Coburg Honour Board.