The Busy Bees of Coburg 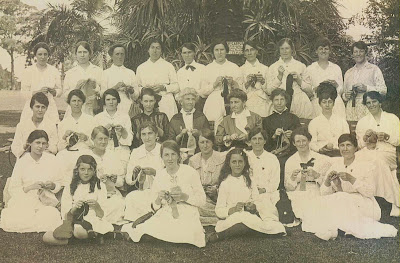 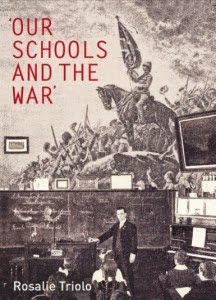 You will see from the photo below that there are a number of school age girls in Coburg's Busy Bee Club. I am guessing that some were from the State School and others from the High School across the road.  It seems that sock knitting was the focus of attention when this photo was taken.

There were also a number of older teenagers and women involved.

I have been trying to establish the location of the photo and think it may have been in what is now Bridges Reserve, next door to the then-High School. I can see that there is a label on the tree behind these women and I can make out the letters '...nycarpus' and what I think is the word 'Excelses' underneath that. It appears to be a native of Japan, but I haven't been able to identify the species. I also don't know whether any of the trees planted at Bridges Reserve would have had labels or whether the plantings would have been this well established in that location. The only other appropriate location I can think of is Coburg Lake Reserve.

I'd be interested to hear from anyone who can add any information about the girls and women in the photo, the Busy Bee Club, the tree in the background or the possible location of this photo. 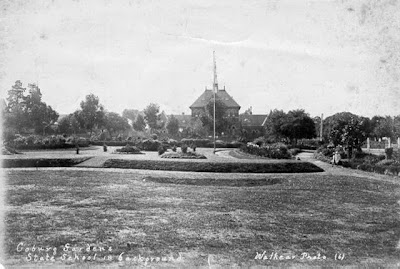 Image courtesy Coburg Historical Society. Image R2_1_5C.001. This photo is taken looking north towards the main school. It is believed that these were then the gardens belonging to the Infant School, although they now make up part of Bridges Reserve. 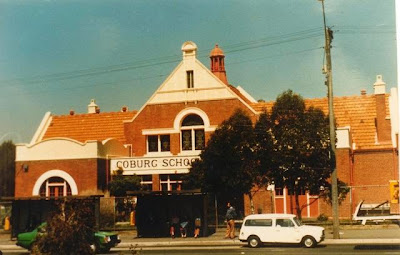 
Recently I spent a day at the Public Record Office of Victoria looking at various school files and I found a number of items of interest, including an early planting scheme for the Infant School garden. It is hard to tell now whether this planting scheme was ever put into action, but it seems that at least some of it was. 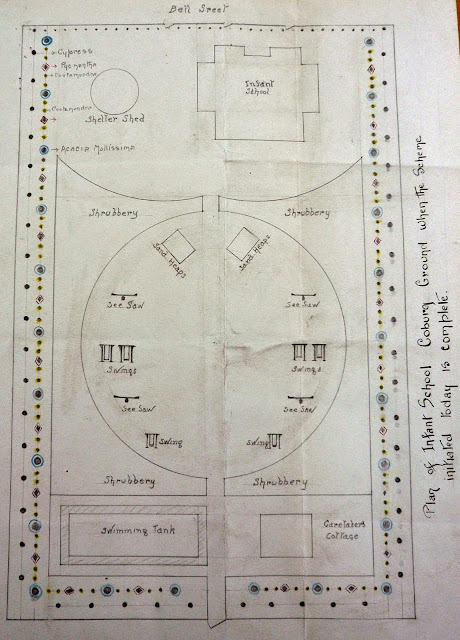 The Infant School was built in 1911 after the land was cleared of a thick covering of thistles.

This plan was prepared by the School Committee in 1915 and drawn by a pupil of the school. It shows that as well as cypress trees, the plantings around the periphery of the school grounds were to include Acacia Pycantha (Golden Wattle), Acacia Baileyana (Cootamundra Wattle) and Acacia Mollissima (also known as Acacia Pubescens or Downy Wattle). The letter accompanying the drawing reveals that because the school grounds were unfenced, earlier tree plantings (at least six cypress trees (Cupressus Horizontalis Labertiana) were planted in 1913) had been destroyed by wandering cows etc. 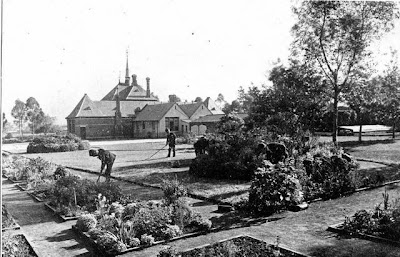 
The school was an enthusiastic participant in the State Schools Horiticultural Society's activities and at the time of the plantings, the Society's organiser, Cyril Isaac was based at Coburg State School.

So keen was the Head Teacher, J.E. Sheehan, that he and Isaac intended to make the school a 'model school in agricultural and horticultural work.' One of their first big tree plantings was on Arbor Day 1913 when the Premier, the Hon. Mr Evans MLC, planted six Cupressus Horizontalis Lambertiana along the boundary of the Infant School. I have recently spoken to someone who lived in Russell Street and he remembers climbing cypress trees along the Infant School boundary in the 1930s. These were probably the same trees.


Towards the end of the war, in late October 1918, the memorial garden to the old boys who died in World War One was planted. 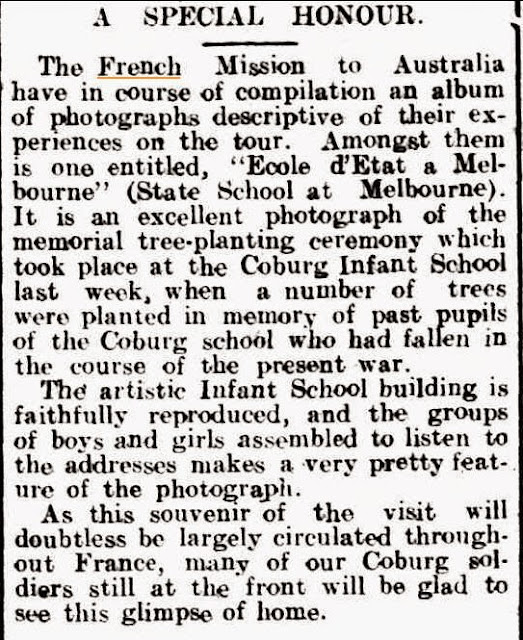 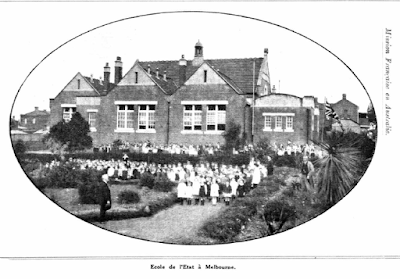 This photograph comes from a souvenir of the visit of the French Mission to Melbourne in October and November 1918, only weeks before the Armistice was signed. The exact date of the Mission’s visit to the school is unknown, but it probably took place on Wednesday 23 October 1918.

Although identified in the souvenir only as an ‘Ecole de l'Etat à Melbourne’, the accompanying newspaper article confirms that it was taken at the Infant School at the time of the tree planting.

My investigations into this now lost memorial to Coburg's war dead continues. Expect to hear more!

And it’s off to war we go 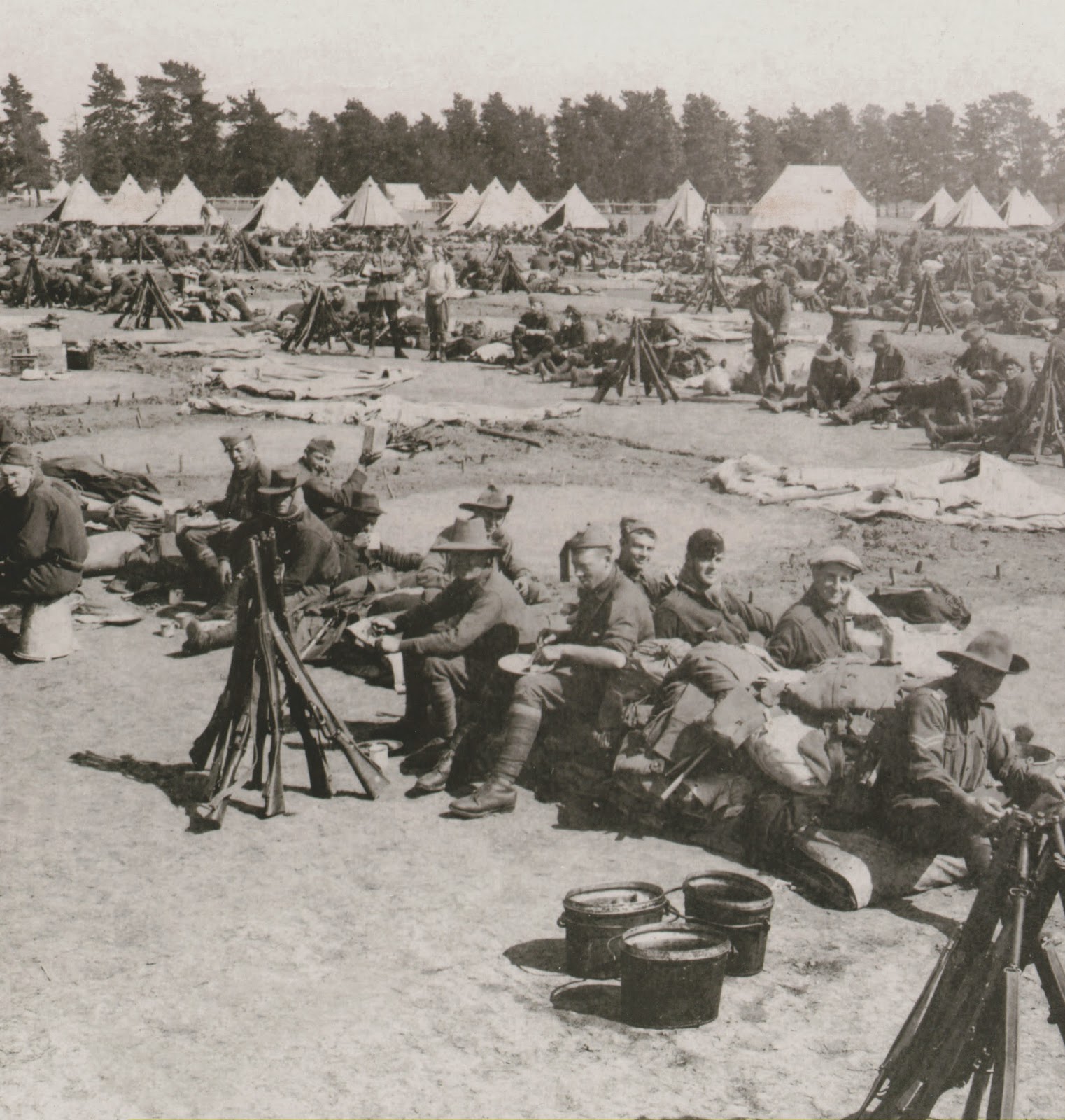 Australian Expeditionary Force. Broadmeadows. Breaking Camp prior to their departure for the front. From a stereographic slide by Geo. Rose. Image courtesy Coburg Historical Society.


In this image we can see that the city of tents at Broadmeadows  is being dismantled. Those ‘crop circles’ you see in the centre of the image are actually the spaces where the tents once were, trimmed with wooden tent pegs. The men are sitting around on their bedrolls and belongings, finishing their meals (I’m sure those are spuds in one of those pots), reading the newspaper or having a chat. It must be later in the year now and at least one man has a scarf wrapped around his ears and part of his head to keep out the cold.

The camp doesn’t look as tidy as in earlier images, but very soon it will be empty space and the men and their belongings will be sailing for the war. Quite soon they will be surviving (or not) in the trenches of the Gallipoli Peninsula, and what quite possibly seemed at the time primitive conditions at Broadmeadows will transform in their minds into a month or two (or more) spent in a luxury holiday camp.