Until very recently I was unaware that Colonel Richard Edmund Courtney of Courtney’s Post fame had a connection to Coburg.

Then I read the reminiscences of Dr Randolph Mathew in an article in an old Coburg Historical Society Newsletter (February 1977). The Mathew family lived in The Grove, Coburg during the early years of the twentieth century. Dr Mathew and his brothers Alexander, John and Mungo all served in the First World War. Theirs was an interesting family. Their father John was the Presbyterian minister at Coburg and a well regarded anthropologist.  He was also a great patriot and on the first big Armistice Day celebration in November 1919, he flew the Union Jack from the tower of his home, held a brief ceremony and all present wrote their names on the tower door.

Further into the article, Dr Mathew made reference to Charlie Dare, son of the developer of the Moreland Park Estate, Monty Dare, and Charlie's friend – ‘a man named Courteney’. 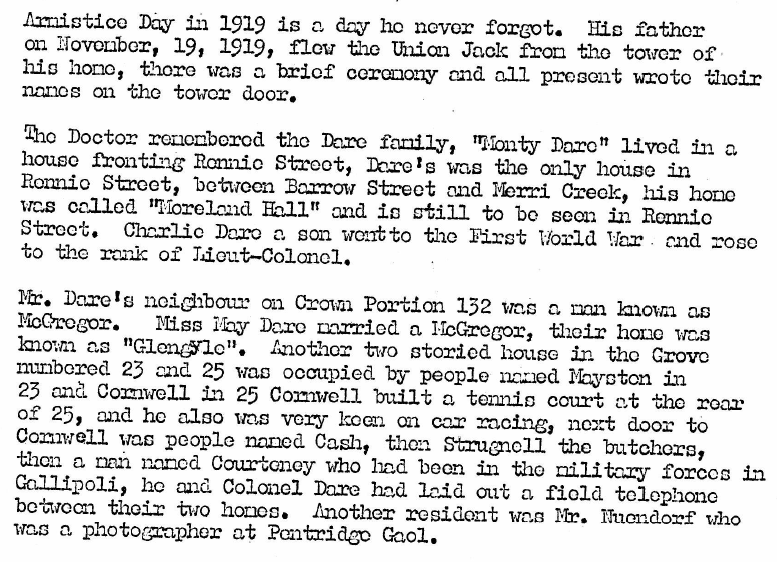 Charlie Dare was Colonel Charles Moreland Montague Dare of the 14th Battalion. In fact, he was the Battalion’s war diarist.

Despite the incorrect spelling of his surname, a little detective work reveals that the ‘man named Courteney’ was in fact Lieutenant-Colonel Richard Edmund Courtney, who had been the first commander of the 14th Battalion. On 27 April 1915 he had brought the 14th up to a position at Gallipoli that then took his name - Courtney's Post.

The two men had been comrades in arms, had probably known each other before they left for the war and clearly maintained their friendship on their early returns from the war (Courtney in 1916 due to heart strain and Dare in 1917 to take up staff duties in Australia). Why else would they lay out a field telephone between their two houses? 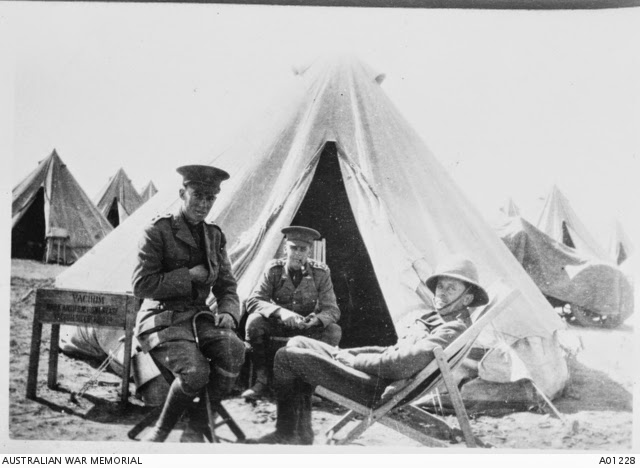 Lieutenant William Hugh Hamilton (left), a Graduate of the Royal Military College, Duntroon ACT, of Ballarat, Vic, who was killed on 18 May 1915 at Gallipoli. Colonel Charles Moreland Dare sitting in a chair, smoking a pipe in centre and Colonel Richard Edmond Courtney sitting in a deck chair outside a tent at the Heliopolis Camp. Taken in 1915 at Heliopolis in Egypt.
Image courtesy AWM. Image A01228.

Courtney, a solicitor in civilian life, died in October 1919 of health problems aggravated by his war service. He is buried at Coburg Cemetery. His name has only recently been added to the Debt of Honour Register by the Commonwealth War Graves Commission, thanks to the efforts of Essendon’s Lenore Frost. Interestingly, his medal group and war papers have been purchased  by the Maryborough Military Museum in Queensland, so you will have the perfect excuse for a holiday in the sun if you want to look at them in person!

Although the Courtneys had strong connections to the Cheltenham area, the family had lived in Coburg since around the turn of the century and Courtney’s unmarried sister Isabella, who was his next of kin, remained in the area until her death in 1954. Several brothers also served with distinction: one was Colonel J.H. Courtney and the eldest brother was Brigadier-General Thomas John Courtney.

There are other interesting stories to tell of residents of The Grove during the WW1 years and they will be the subject of future blog entries.

Twenty-seven year old Irishman William Devine enlisted as an army chaplain in July 1915. Born in Castlederg, County Tyrone, he gained a BA and BD in Ireland and came to Australia in 1914. He had been assistant parish priest to the elderly Fr Matthew Hayes at St Paul’s, Coburg for twelve months at the time of his enlistment. His older brother George (who signed as de Vine) served with the British forces. He attested in February 1916 with the Royal Horse and Royal Field Artillery, having previously served with the Royal Army Medical Corps for twelve months.

Usually we see parents or siblings or other family members listed as next of kin, but as he was a Roman Catholic priest Chaplain Devine listed his next of kin as the Dean of St Patrick’s Cathedral, Melbourne and Archbishop Carr, Chaplain General, recommended him as a military chaplain.

Fr Devine served with distinction and was awarded the Military Cross and the Croix de Guerre. The Australian Dictionary of Biography records that he spent most of his time with the 48th Battalion and that he wrote about the Battalion’s war experiences just after the war ended. 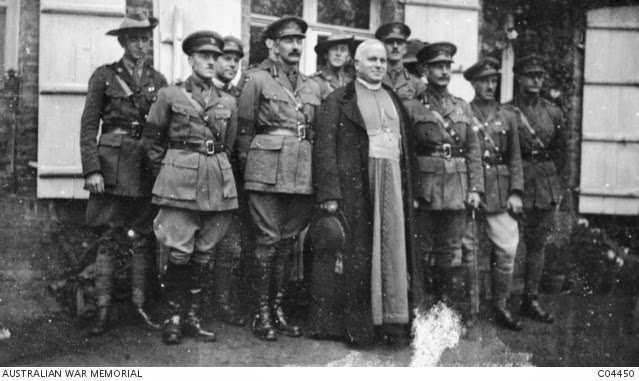 In February 1919 he became seriously ill with broncho-pneumonia and was hospitalised in London. After his return to Australia in May 1919, he organised for fourteen Victoria Cross winners to act as Archbishop Mannix’s guard of honour in the famous 1920 St Patrick Day’s procession.

You can read more about the 1920 St Patrick’s Day Procession here.

Here are the 14 VC winners, some Catholic and some Protestant: 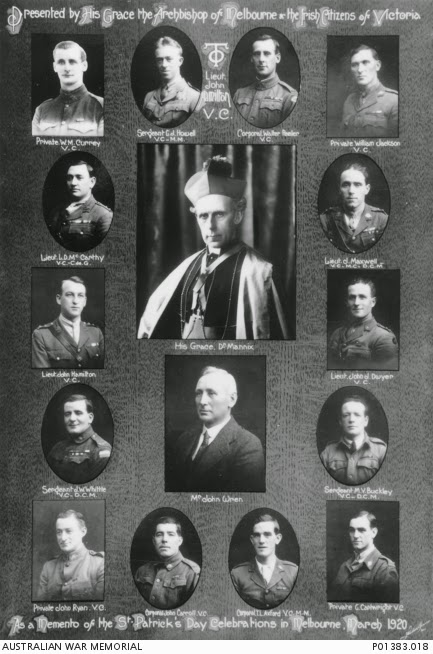 You will find more information on the image here.

And another image showing the 14 VC winners: 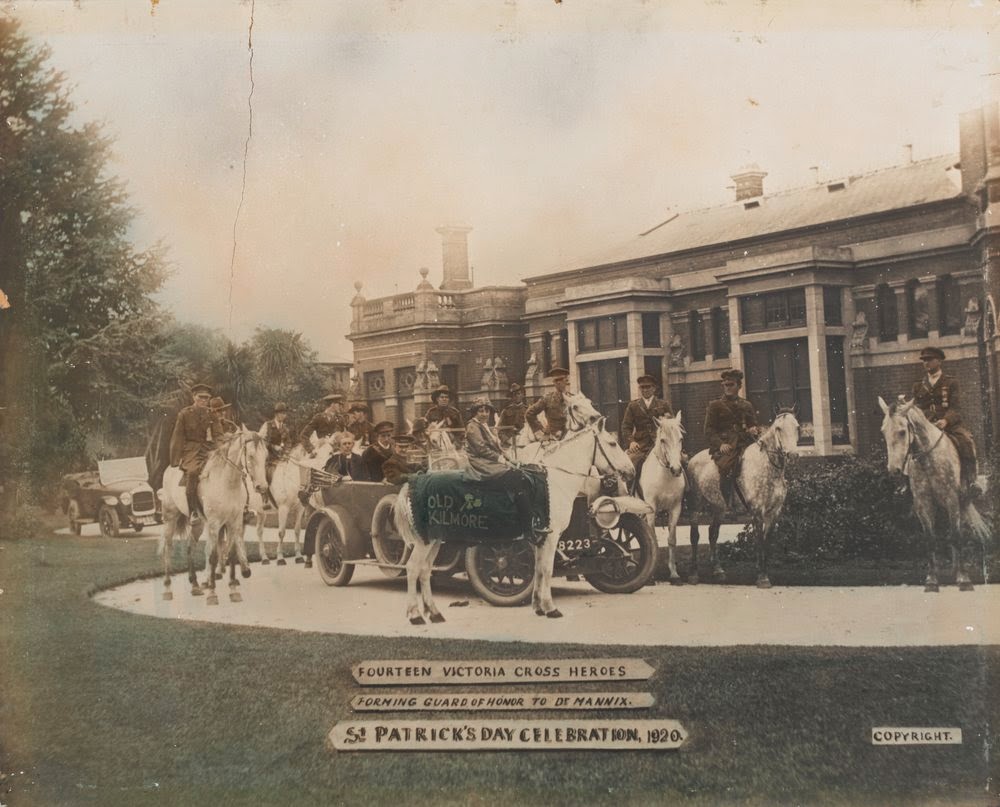 Now back to Fr Devine …

Fr Devine later returned to Ireland but moved on to serve in China in 1927, where he stayed for three years before returning to Ireland. He died in Dublin in 1959.
The following article from the Advocate, 12 May 1917, gives an insight into William Devine the man, something that cannot be conveyed in the official record. 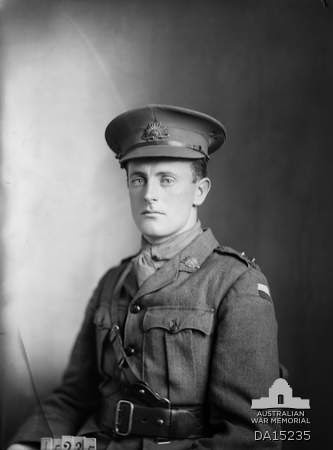 
In my last blog entry I noted that Joe Catron and his wife Zoe attended an Anzac Day service at Gallipoli in 1921. I now know that this was the third such ceremony but only the first attended by women.

You can read more about this early Anzac Commemoration on the New Zealand Government's World War One website. On the website you will also find a pdf of the original dispatch relating to the event. The following images were part of that dispatch. 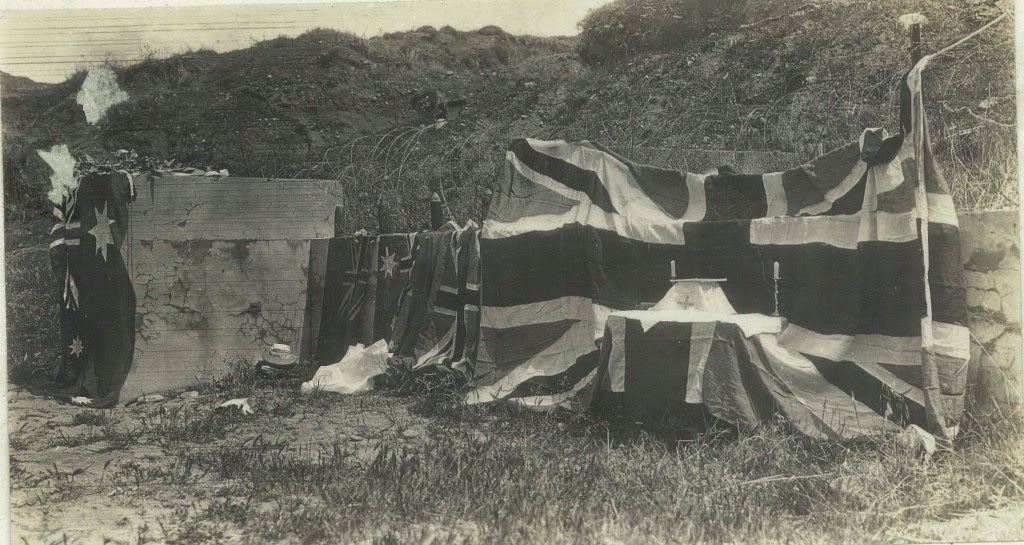 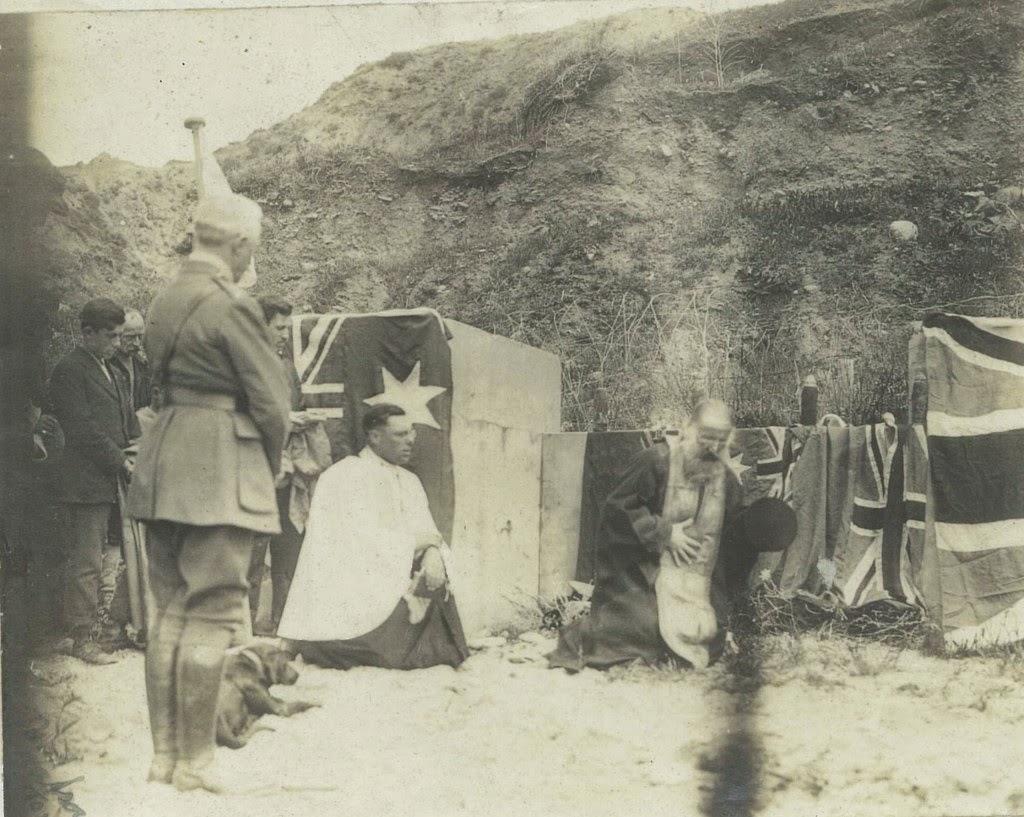 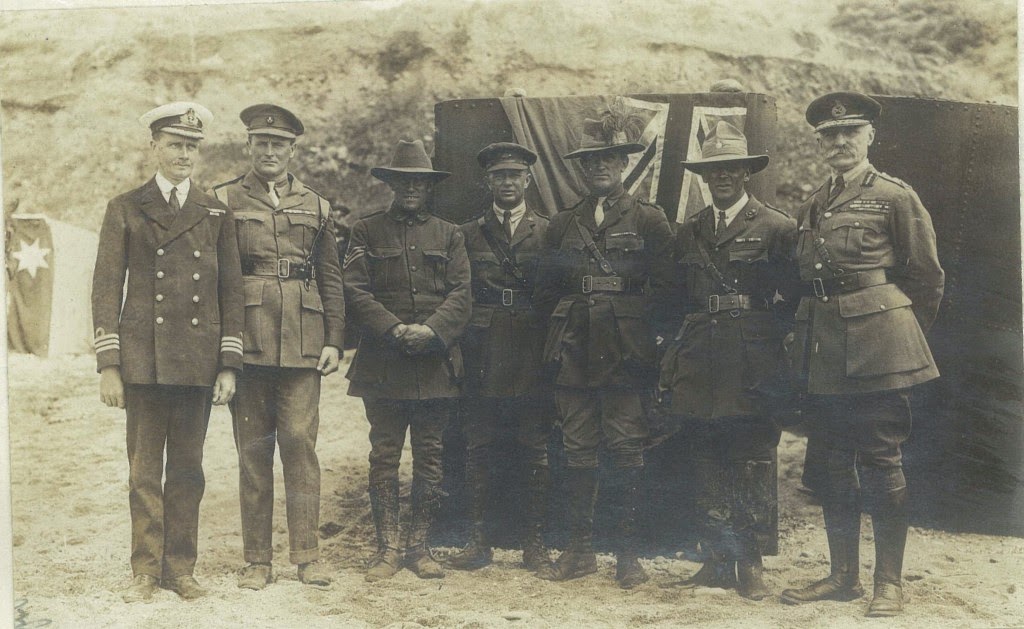 More on the Catron brothers


Since I wrote about the Catron brothers in March this year, I have been in contact with several members of the family who have provided information and images that add to the story of the Catron family during World War One and beyond.

Most importantly, since making contact with one of Joe Catron's three granddaughters, I would like to add some information to an image I posted at that time.

The following is a photograph taken at the time of Joseph Catron's marriage to Zoe May in 1916. 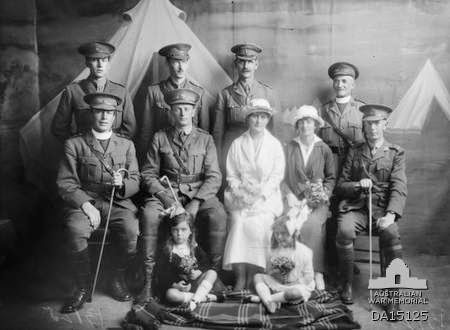 This photo is of the Joseph and Zoe Catron's wedding party. On the bride's right is maid of honour Ivy Catron (wife of Joseph's brother William, who was killed in action in March 1917) and William and Ivy’s daughters Muriel and Unity are sitting on the blanket in the foreground of the photo. (Information provided by one of Joseph Catron’s three granddaughters.)

Joe Catron married Zoe May in 1916 while convalescing in Australia from injuries received at the Dardanelles in May 1915. He later returned to serve in France and spent a short time in the Indian Army before returning to Australia and resuming his career as a teacher. The couple had a daughter and son. Their son, William, a Lancaster pilot based in England, was killed during WW2, aged 19. Their daughter Virginia served as an army nurse during WW2. She married an army chaplain in 1943, went on to have three daughters, and passed away in 2006.

Joe’s wife Zoe lost her brother Alan May at Gallipoli and Joe later lost his brother William in France. All three men left Australia together with men and friends of the Geelong area in the 8th Battalion and served together at Gallipoli.

I have since learned from another source that Joe and Zoe Catron travelled to the battlefields in 1921 to attend an Anzac Day service. Up until then, I had not realised that ceremonies were being held as early as this and I am now trying to find out more about these early commemorations.

There is more to tell about the Catron family's war, but I will leave that for another time.
Posted by cherylg at 18:29 1 comment: