Patients at the Glenroy Military Hospital

Once again, the story of the men who were treated at the Glenroy Hospital has begun to emerge from that wonderful online newspaper collection found at TROVE. Each time I go back and search again, I find that new resources have come online, so this story is far from over.
At first I found only mentions of men who had died, but slowly a picture is emerging of some of the others who were treated there.
What follows here are the references to patients that I have uncovered so far:
July-August 1915. Signaller Stanley Selbey (Stan) Stoney, late of the Parramatta Boys Scouts, contracted measles at Broadmeadows Camp during a fortnight’s instructions and spent three weeks at Glenroy Hospital.  By mid-August he was at home on furlough. He went on to serve in France and arrived back in Australia in July 1919, having survived a bout of influenza at the end of the war. (The Cumberland Argus and Fruitgrowers Advocate, 11 August 1915 and attestation papers)
16 August 1915. Private Rudolph (Rody) Ryan of Mortlake died at Glenroy Military Hospital. (Argus, 16 August 1916) His attestation papers show that he died just over a month after enlisting in the 10 Reinforcements of the 7th Battalion. He was a 32 year old traveller and listed his mother, Mrs Annie Ryan of Warrnambool, as his next of kin. He died at Glenroy Hospital on 16 August 1915 of tubercle of lung (12 months), measles and haemophysis. He was buried at in the Roman Catholic section of  Coburg Cemetery, Compartment A, Grave 46 on 16 August 1915.  The Mortlake Dispatch of 18 August 1915 records that his sister was serving overseas as a nurse.
28 August 1915. William Swanson Naismith, second son of J.T. and M.E. Naismith, died at Glenroy Military Hospital of influenza and heart strain. (Attestation papers and Portland Guardian, 28 and 30 August 1915) He was in the Naval Reserve Unit and had been ill for a month. His body for returned to Portland for burial. A detailed account of his funeral can be found in the Portland Guardian, 1 September 1915. 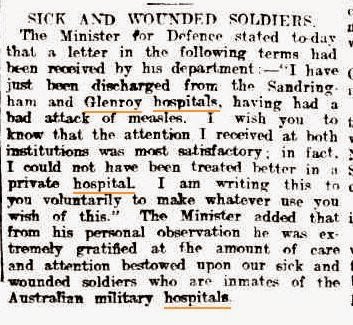 2 October 1915. A typhoid patient was discharged from Glenroy Military Isolation Hospital. The unnamed soldier arrived in Wagga on 3 October and was admitted to Wagga Hospital on 4 October. (Daily Advertiser (Wagga Wagga), 15 October 1915) This is the only mention I have found to a typhoid patient being treated at Glenroy.
30 October 1915. Thirty-two year old Donald Kirk died at Glenroy Military Hospital. of measles and broncho pneumonia. He was the fourth son of James Kirk of Myocum, NSW.  (Mullumbimby Star, 4 Nov 1915, p.5)  His attestation papers show that he was a cheese maker who enlisted in the 12 Reinforcements, 2nd Light Horse at Toowoomba on 11 September 1915, about six weeks before his death. He was buried in the Church of England Section of Coburg Cemetery, Compartment D, Grave 648 on 30 October 1915.
November 1915. Pte Joseph Paul Lugg of the 4th Light Hosrse was a measles patient and doing well, according to his widowed mother Agnes, who lived at Airey's Inlet. Unfortunately, Pte Lugg did not recover. He died of cerebro spinal meningitis at the Alfred Hospital on 8 November and was buried at the Mount Duneed Cemetery the day after his death. (Geelong Advertiser, 3 Nov 1915 and attestation papers) 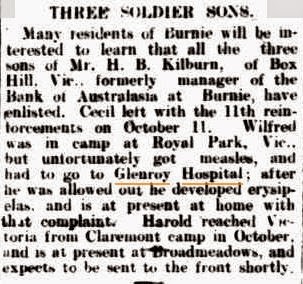 Wilfrid Esmond Kilburn joined the Flying Corps as an air mechanic. He survived the war and returned to Australia in March 1919.
12 June 1916. Tarrant Baker of Broadford died at Glenroy Military Hospital bronchial pneumonia and measles, having been ill for 12 days. He had been in camp at Seymour from 1 March to 22 May but was transferred to the Glenroy Military Hospital on 7 June 1916 (It is listed here as #5 Australian Infectious Diseases Hospital, Glenroy). He had enlisted in the 13/24th Battalion in February that year. (Attestation papers and Argus, 23 June 1928) 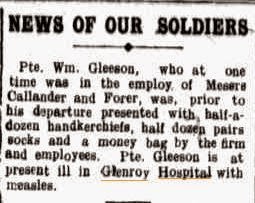 Much of the fund raising for the Glenroy Hospital was organised through the efforts of Linda Davis of 'Moreland Hall', Coburg and the citizens of Coburg. This will be the focus of the next few blog entries.