In July 1915, Dr Carl Dyring, Coburg’s Health Officer, enlisted. He was 55 years old and was soon on his way to the 2nd Australian General Hospital  at Gezireh in Cairo. 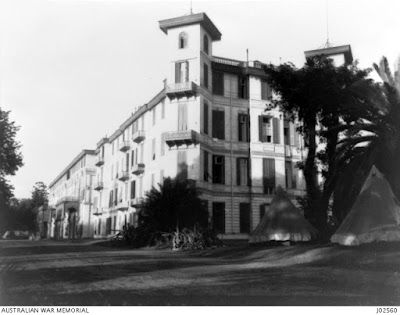 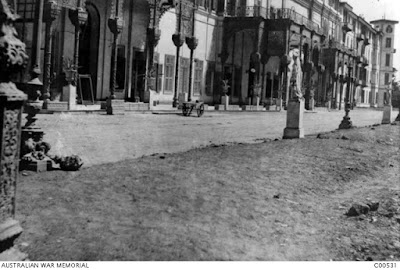 Image courtesy AWM. Image C00531. Part of the facade of No 2 Australian General Hospital, which was located in the Ghezireh (Gezira) Palace in Cairo from June 1915. 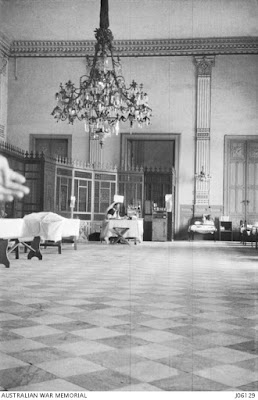 
Dagmar Cohn had married Carl Dyring in 1901. She was the daughter of Jacob Cohn, one of three Danish brothers who arrived (with Carl Dyring’s father) during the goldrush era and established Cohn Brothers, well-known makers of cordials and beers. She was also related to the sculptor Ola Cohn who made the Fairies' Tree in Melbourne's Fitzroy Gardens.
Although Dagmar had been living in Coburg for fourteen years by the time she left for Egypt and her three children had been born in Coburg, Bendigo claimed her as their own, as can be seen in the newspaper article that follows. The article was pubished in the Bendigo Advertiser, 11 May 1916, p.8. 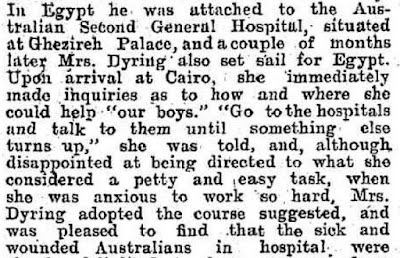 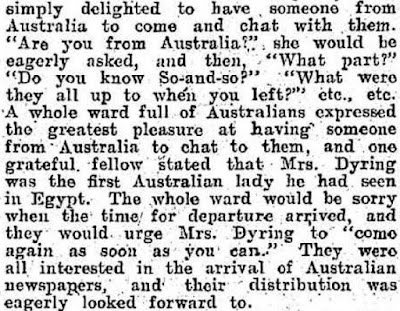 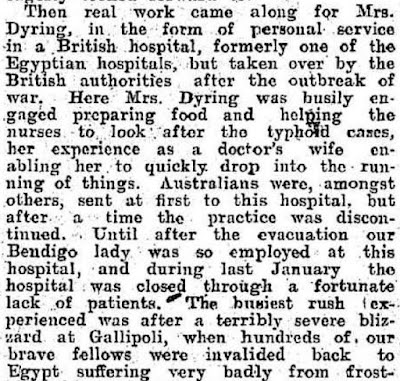 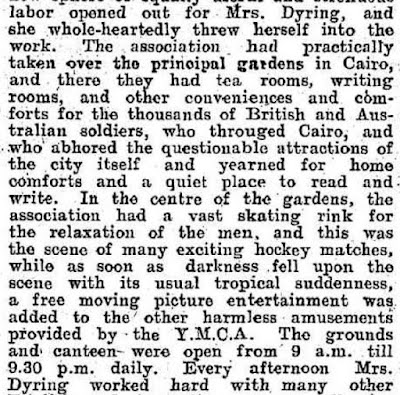 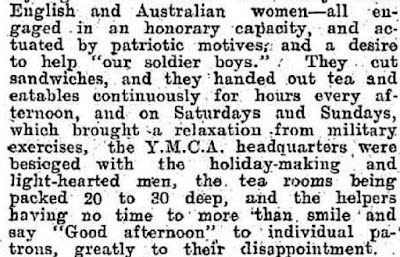 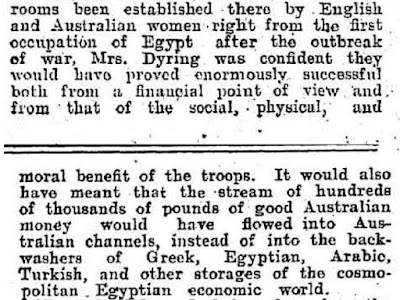 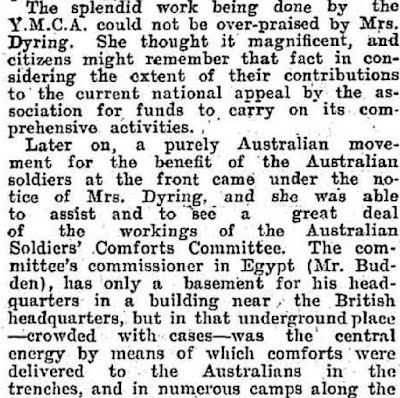 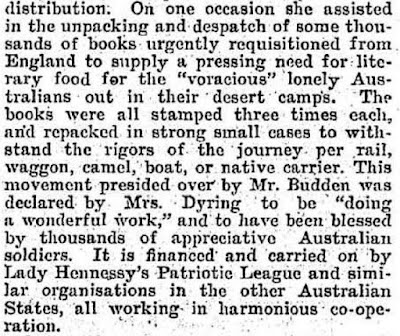 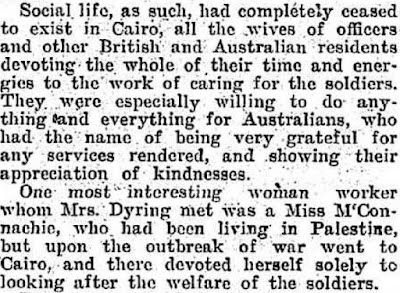 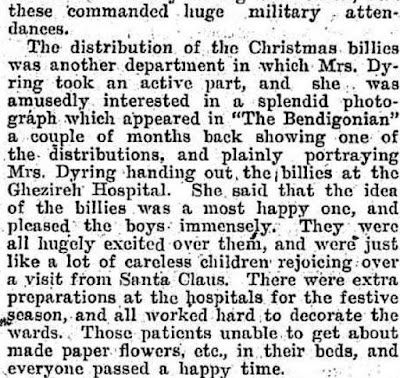 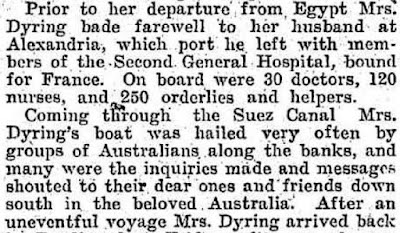 The article in the Bendigo Advertiser gives a detailed picture of Dagmar Dyring’s eight months in Cairo and provides us with a different perspective of hospital life. Most of the voices we have heard to date have been from patients or medical staff. Here we have a privileged woman, who has enjoyed an active social life both in Bendigo and in Coburg (yes, there was a very active social set based around Moreland Grove). She has made her decision to do her bit for the war and support her husband. On arrival, she was disappointed at the tasks she was given, but soon found a niche for herself, firstly at Gezireh, then at a British Hospital and finally at the YMCA canteen. She became involved with the Australian Soldiers’ Comforts Committee and helped distribute Christmas billies, as can be seen in the following (poor quality) photos published in the Bendigonian, 24 January 1916, p.15. 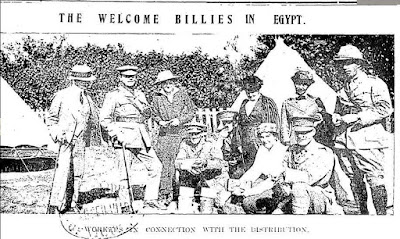 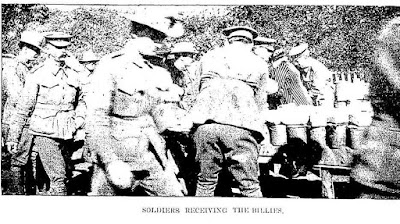 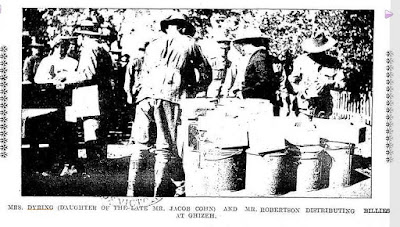 Images from the Bendigonian, 24 January 1916, p.15. Dagmar Dyring is in the third photograph. 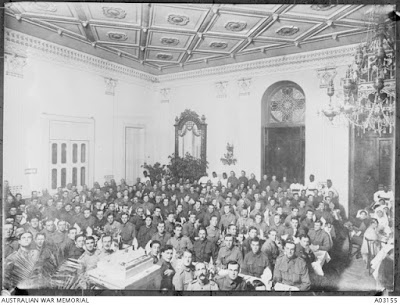 Image courtesy AWM. Image   A03155. A farewell dinner for the staff of the 2nd Australian General Hospital at Gezireh Palace, prior to embarking for France.


When Gallipoli was evacuated and the Australian troops relocated to France, Carl Dyring went with them and Dagmar returned to Australia. By May 1916, she was living with her mother Rose at her home ‘Horsens’ in Bendigo. She had brought back with her a ‘large collection of curios’ and twice a week ‘Horsens’ was open to public to come and view the collection. These were not war-related momentoes, but ‘exquisitely embroidered Eastern cloths, hangings and draperies’, brass work, jewellery. There was even a bracelet made from a ‘genuine scarab.’The cost was sixpence and the funds raised went towards the Australian Soldiers’ Comforts Fund. (Bendigonian, 18 May 1916)

By December 1916, Carl Dyring’s war was over, too. He was invalided home with heart disease and emphysema. He did not return to Coburg. Instead, he sold his practice to Dr R.A.R. Wallace, who took over his role as Coburg Health Officer. He then retired to Brighton where he and his wife spent many hours tending their extensive gardens at their home ‘Marhabba’. (Perhaps the house was so named from ‘Marhaba’, Arabic for ‘hello’. )

The Dyrings had a fourth child, Patricia, in 1920. By the mid-20s daughters Rosa and Moya begin to make an appearance in the social pages of the newspapers, just as their parents had in the years before the war. In the late 1920s, son Carl graduated as a doctor and daughter Moya was making her name as an artist. In 1931, Carl Dyring died aged 71 at which time Dagmar moved into an apartment. She died in June 1947 aged 72.