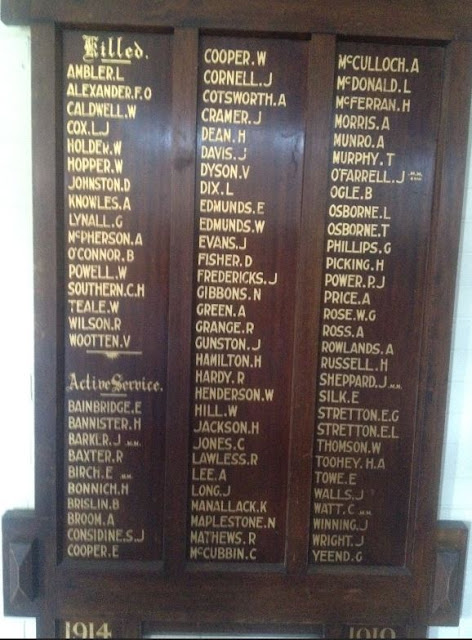 I took this not very good photo of Coburg Cycling Club's WW1 Honour Board in January 2015.


There were many articles about members of the Cycling Club who enlisted in the local newspapers. One of the most detailed was this one from the Brunswick and Coburg Leader, 4 August 1916.

Coburg Cycling Club: It is the great pride of the club that they have sent so many champions to the front. A roll of honor board was made some time ago, but it is full: 40 names in all. There are 20 names to be put on yet, hence the necessity of another board.

Among the latest members who have been wounded are L. Cpl. Broome and Pte. Lou. Ambler. Both are progressing favorably, according to latest advice.

Recently we announced that Pte. C. Jones, our great champion, had been 'seriously wounded' receiving a bullet in the head. We are now pleased to report that he has been through a successful operation and is on the road to recovery. He will be remembered as one of our foremost road and track champions, representing the club in Nella Shields and road premierships, gaining 2nd place in the 25-mile premiership, and other races too numerous to mention. His cheerful, willing disposition, his good nature, gained for him many friends in the ranks, as it did in the Coburg Cycling Club. He enlisted in July 1915, in company with J. Sheppard and W. Cooper, who, we are pleased to report, are in the best of health.

Corporal Gambetta, who enlisted and was rejected, was for several months on home service. He has now received his discharge. We will now see his well-known figure on the road. He is training hard in preparation for the big wheel race at the Exhibition, to be held this month. He has every hope of getting into form again and repeating his former successes. His ambition is to get to the front and fight for King and country.


In the end, the Honour Board listed 86 Club members, 16 of whom died.