Walter Ramsay McNicoll (later Sir Walter) had been a teacher with the Victorian Education Department since he was 16 years old. In February 1900, eleven years after he started work as a monitor, he entered the Teacher Training College in Carlton and by 1904 he had Matriculated.

He married fellow teacher Hildur Wedel in 1905 and when he enlisted in the 7th Battalion in August 1914 he was the Head Master of the Geelong Continuation School.

An outline of his teaching career and his war service can be found in the Education Department's Record of War Service. 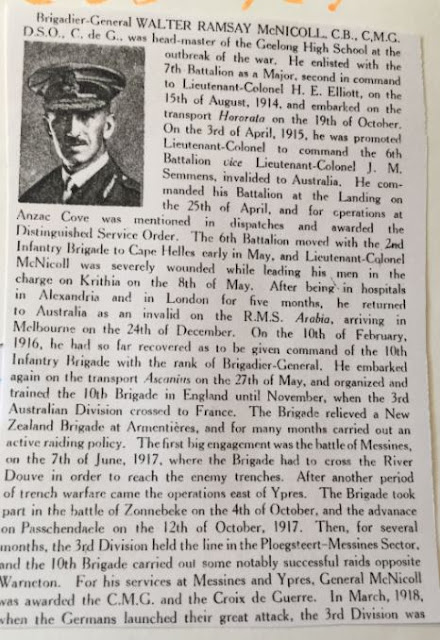 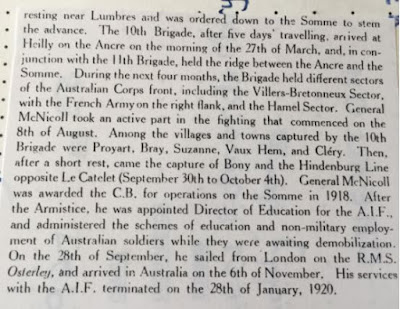 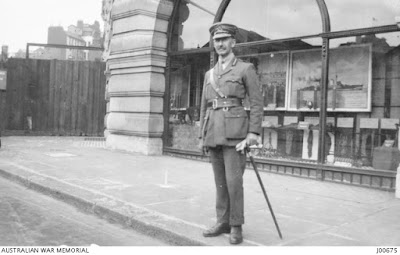 Image courtesy Australian War Memorial. Image J00675. Portrait of Brigadier-General (BG) Sir Walter Ramsay McNicoll, KBE, CB, CMG, DSO, VD, on the footpath in front of an armed services window display. BG McNicoll was the Headmaster of Geelong High School before enlisting for World War 1. BG McNicoll enlisted in August 1914 and was appointed as Major, 2nd in command in the 7th Battalion on 28 August 1914. In April 1915 he was promoted to Lieutenant-Colonel of the 6th Battalion. He was wounded at Gallipoli Peninsula and awarded the Distinguished Service Order (DSO) dated 11 September 1915. In February 1916 he was promoted to Colonel in the 10th Battalion. In May 1916 to be temporary Brigadier-General of the 10th Battalion. On 18 April 1918 BG McNicoll was awarded Companion of the Order of St Michael and St George (CMG); he was also made a member of the military division of the Order of the Bath (CB) on 23 May 1919. On 23 July 1919 BG McNicoll was awarded the Croix de Guerre Belgium. BG McNicoll was also made a Knight Commander of the British Empire and was Mentioned in Despatches on five occasions. On 13 November 1915 BG McNicoll, having been severely wounded returned to Australia and was classed as unfit for service for six months. He re-enlisted on 7 June 1916 aged 49 years. He was immediately posted overseas. BG McNicoll returned to Australia on 28 September 1919. (From the collection of Mr Alfred Thomas Sharp.) 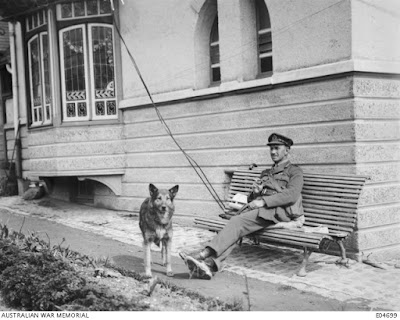 Image courtesy Australian War Memorial. Image J00675. E04699. Taken in France on 5 April 1918. An informal portrait of Brigadier General Walter Ramsay McNicoll CMG DSO, GOC of the 10th Australian Infantry Brigade, sitting on a bench outside of the Brigade Headquarters with his dog Karl, a captured German messenger dog. Note the wires running down the wall behind.


Much has been written about McNicoll's later life, outlined in his Australian Dictionary of Biography entry, which you can read here.

However, for a short time he made a huge impression on the students at Coburg High School. 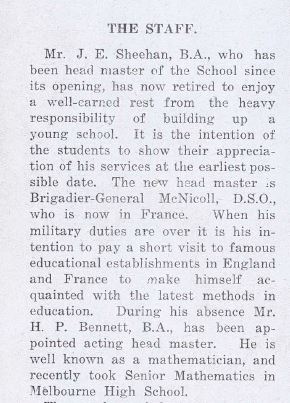 
In the school's centenary history Loyal in All (available from the Coburg High School Historical Group), we are told that 'Brigadier General McNicoll, headmaster in 1920, was a distinguished former soldier with a 'romantic limp'. He rode a motorcycle with sidecar and was able to 'transform a boisterous junior cadet corps found misbehaving in the school yard. “Without raising his voice, within 10 minutes he had us drilling with the discipline and precision of Grenadier Guards", recalled a student of the day.' (Loyal in All, p.21) 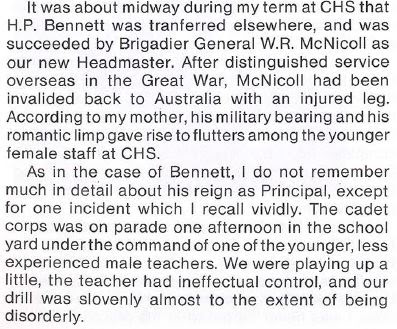 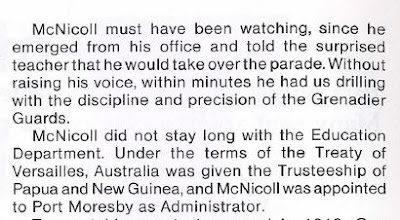 
At the end of 1920, McNicoll left Coburg High to take up the position of Principal of  Goulburn Girls School (Presybterian Ladies College), in New South Wales. 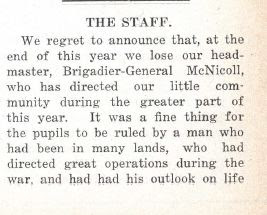